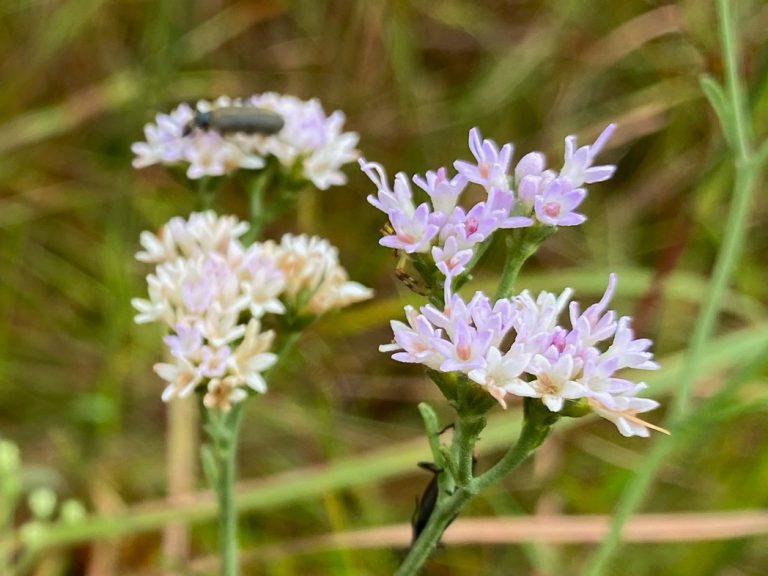 Hartwrightia (Hartwrightia floridana) is an uncommon inconspicuous wildflower found in only 10 Florida and five Georgia counties. It is a state-listed threatened species in both states, where habitat loss and fire suppression imperil it. The plant occurs in seepage slopes, depressions, marsh edges and wet pine flatwoods and prairies. Its pastel flowers bloom in late summer and fall. Pollination has not been studied specifically in Hartwrightia, but it is presumed its flowers are pollinated by the same variety of insects that pollinate other Asteraceae species. 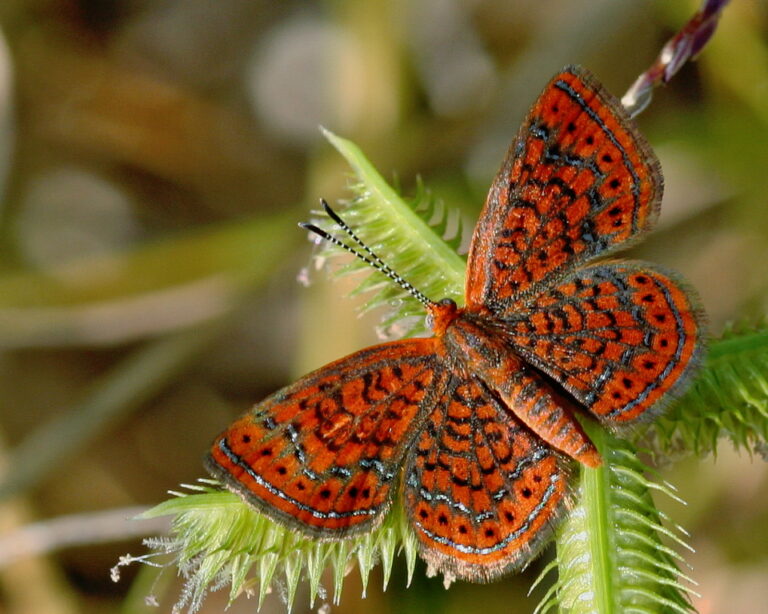 The Little metalmark is one of the tiniest butterflies, having a wingspan of only 1.2 – 2.5 cm. The silver markings on its wings give members of the Riodinidae family the common name “metalmark.” Host plants of the Little metalmark caterpillar are in the Asteraceae family, and include Purple thistle (Cirsium horridulum), Vanillaleaf (Carphephorus odoratissimus) and Climbing hempvine (Mikania scandens). 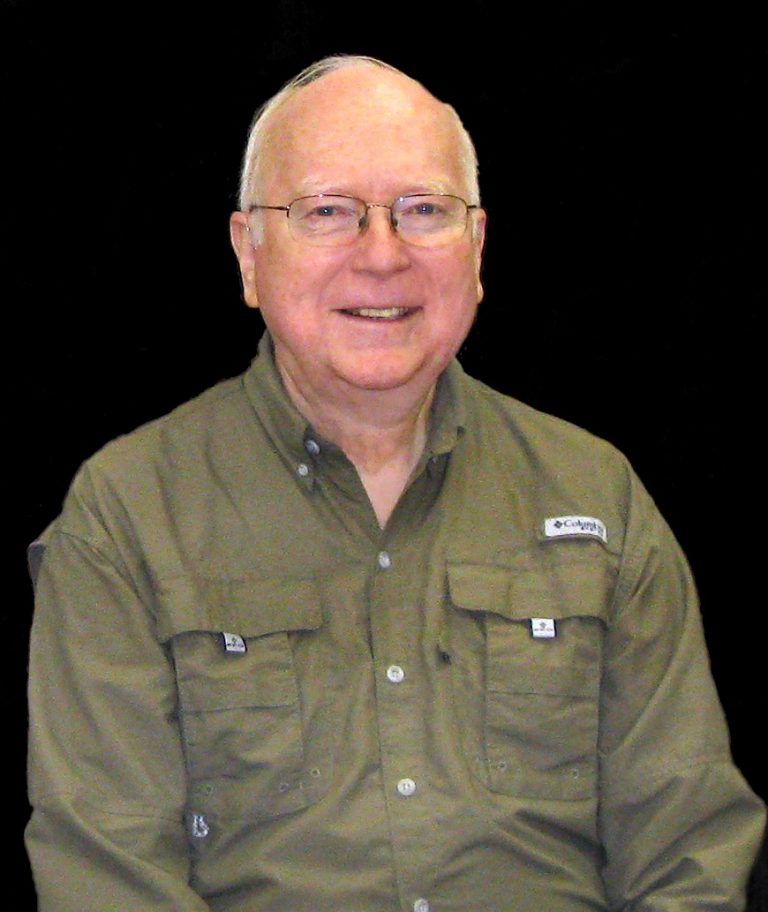 Dr. Loran Anderson is a professor emeritus in the department of biological science at Florida State University in Tallahassee. His research has focused on plant taxonomy and systematics in the Florida Panhandle and elsewhere. He is currently compiling a checklist of native plants in Panhandle counties that will include rare and endangered species. In 2016, he received the Foundation’s Coreopsis Award in recognition of contribution to Florida’s wildflowers. 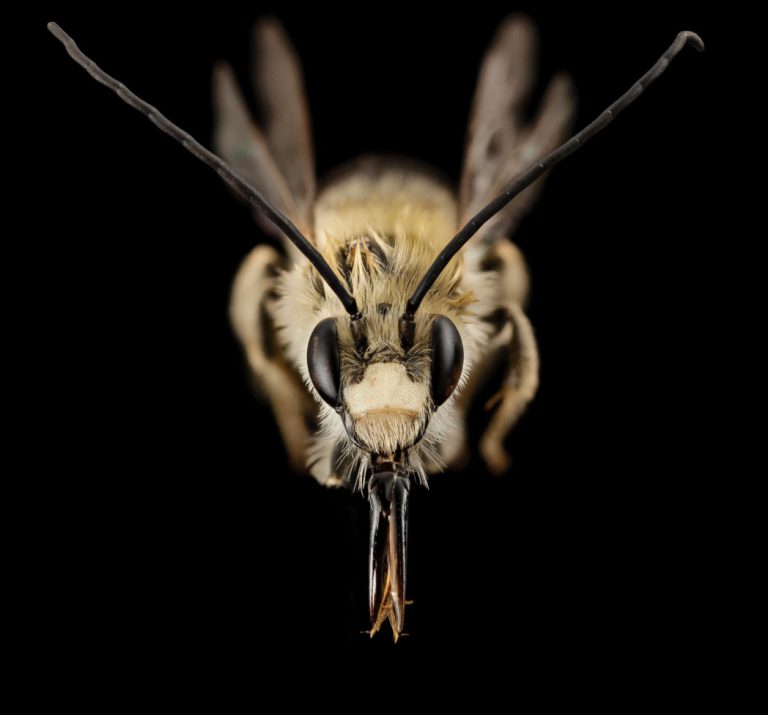 The Eucerini tribe is collectively referred to as the “long-horned bees,” but some genera within this tribe have other common names such as squash bees and sunflower bees. Long-horned bees can be difficult to tell apart, but males are easy to spot with their extraordinarily long antennae! 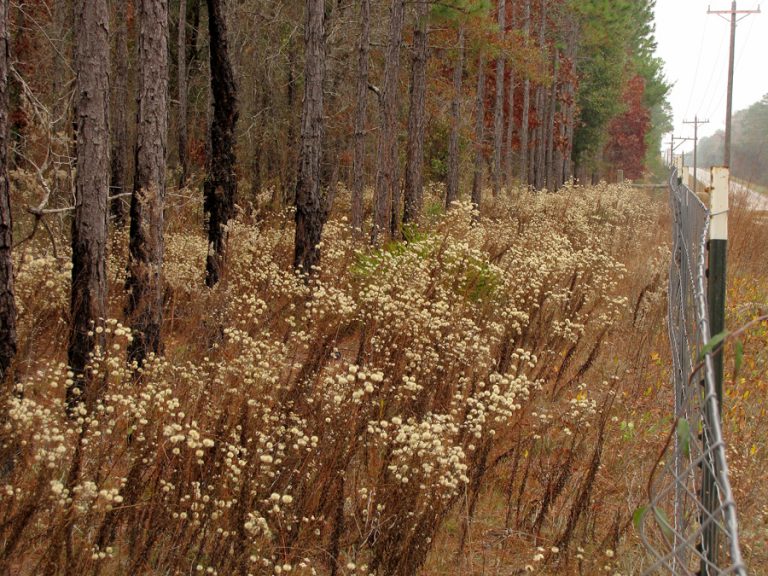 At this time of year, the foliage of many native grasses has senescensed, or is senescensing — the technical term for dead or dying. So, it’s time cut them back, right? Not so fast. 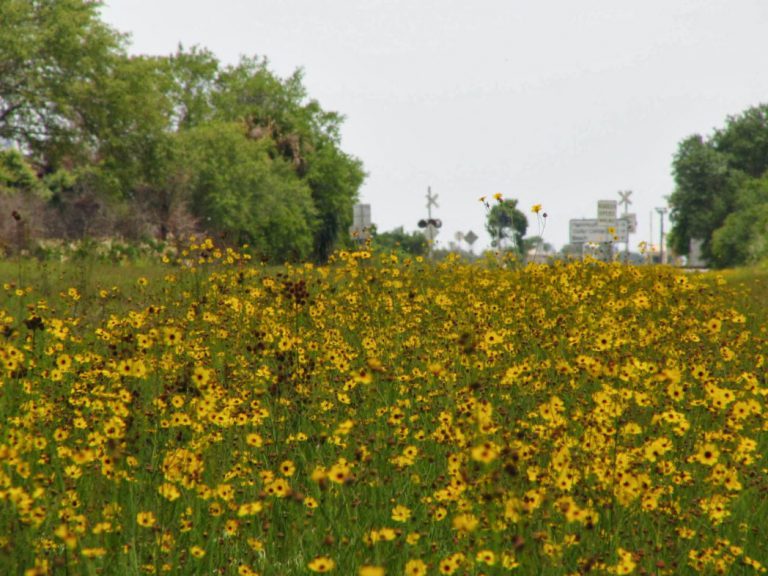 It’s November, and you might not expect to see any showy bloom of native wildflowers and grasses. But don’t jump too that conclusion too fast, because beauty is in the eye of the beholder. 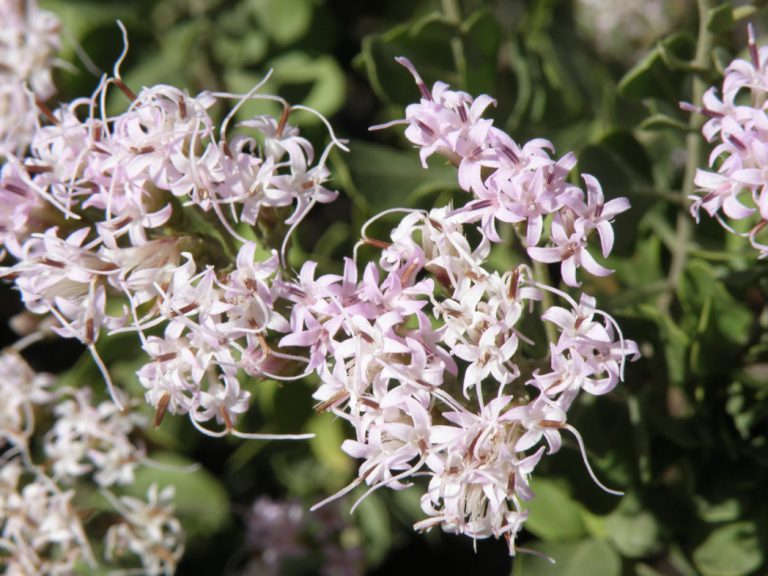 Garberia (Garberia heterophylla) is endemic to Florida’s north and central peninsula and is a state-listed threatened species. It is an excellent nectar source for many butterflies and bees. 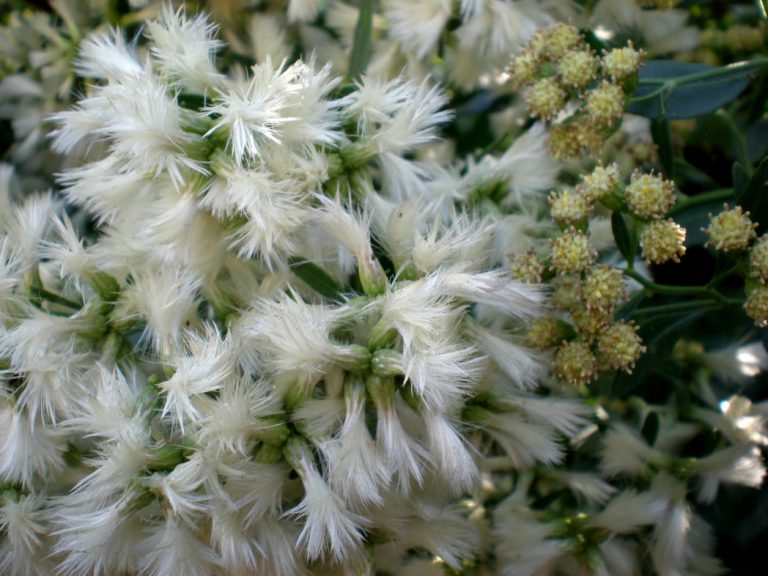 Also known as Groundsel tree and Sea myrtle, Saltbush (Baccharis halimifolia) is a long-lived perennial shrub that typically blooms in fall. It occurs naturally in coastal uplands and dunes, along pond margins, and in ditches and disturbed areas. It is an evergreen in the southern part of the state, but can be deciduous in northern Florida. 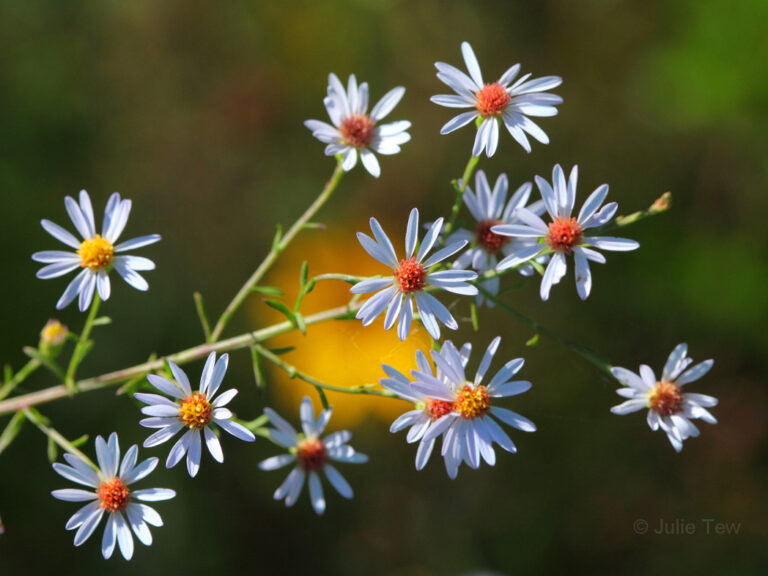 Rice button aster (Symphyotrichum dumosum) is a profuse bloomer with small flowers that attract a plethora of pollinators including butterflies and native bees. 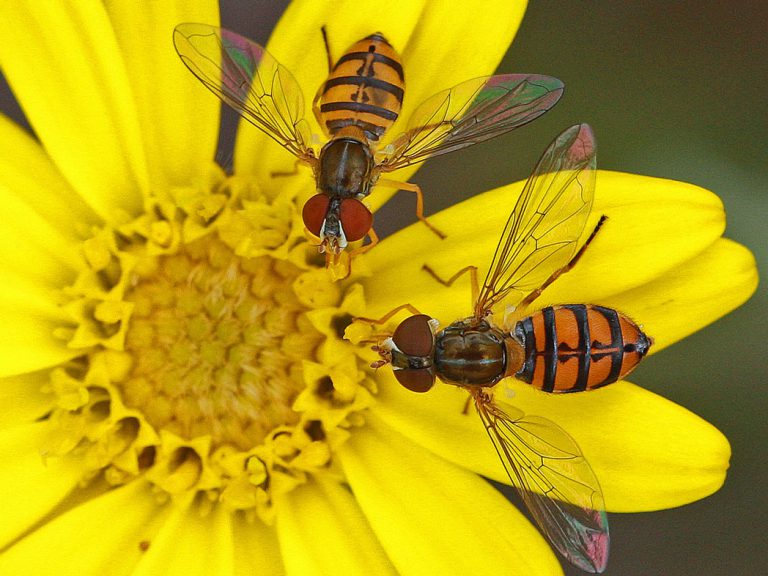 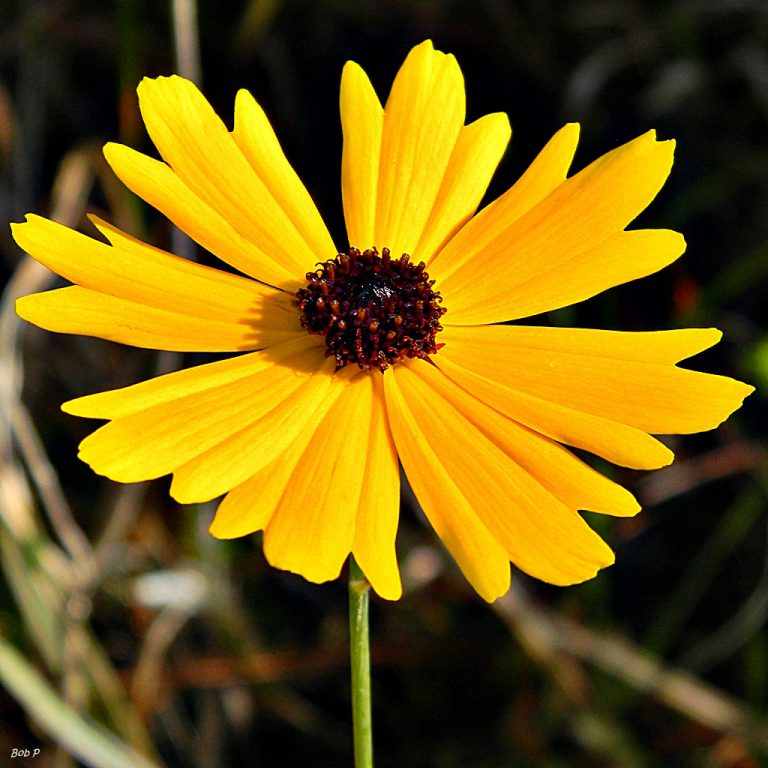 Florida tickseed (Coreopsis floridana) is one of 12 Coreopsis species native to Florida. It is endemic to the state and occurs naturally in wet pinelands and prairies, cypress swamp edges and roadside ditches. It typically blooms from late summer into early winter, but may bloom year-round. Its bright sunny flowers attract a variety of pollinators, especially butterflies. 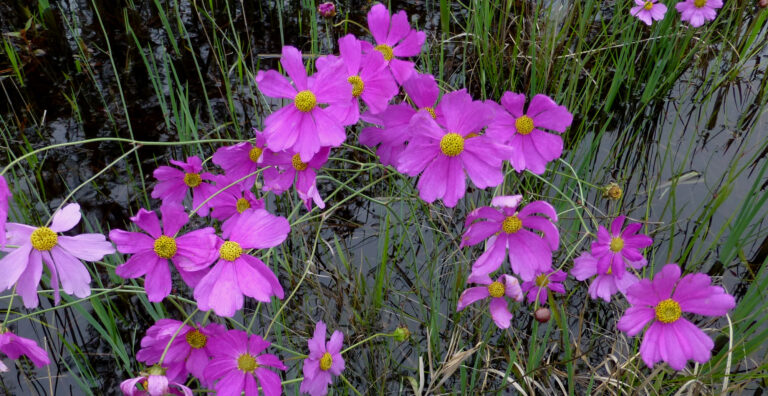 Swamp tickseed (Coreopsis nudata) blooms in spring and is attractive to bees, although butterflies and other pollinators are known to visit them. Birds eat its seeds.