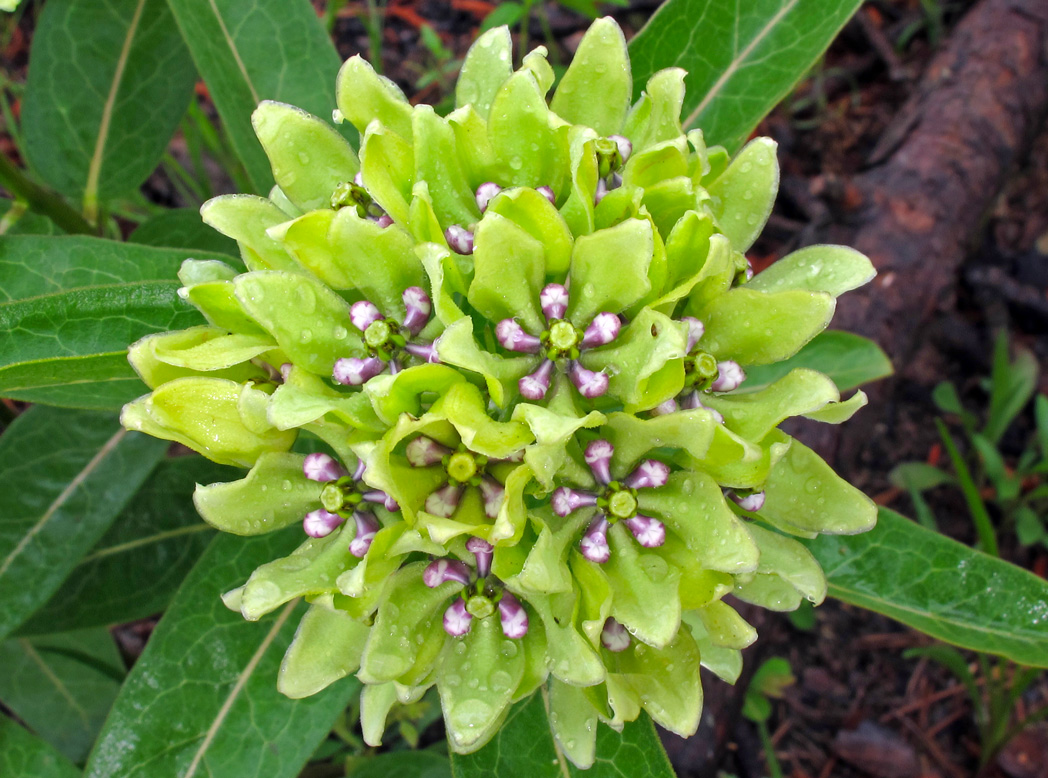 Green antelopehorn is an herbaceous perennial wildflower found in pinelands, pine rocklands and disturbed areas in a few Florida counties. It flowers winter through summer, with peak blooms in spring. Like many members of the milkweed family, Green antelopehorn is a larval host plant for Monarch, Queen and Soldier butterflies. Their caterpillars have adapted to feed on the plant, which contains a milky latex that is toxic to most animals. The flowers are also an important nectar source for bees and wasps.

Green antelopehorn’s flowers are born in large umbels with ±10 flowers in each umbel. Corollas consist of five erect petals that may be white or green with a yellowish or purplish tinge. Stamens are purple. Despite having “horn” in its common name, the flowers lack the horned structure that are common to many milkweed species. Calyx is five-lobed. Leaves are coarse, petiolate and lanceolate to oblong or ovate. Leaf margins are entire. Arrangement may be alternate or almost opposite. Stems are stout and may be erect or sprawling. Stems and leaves exude a milky sap when broken. The plant has a long taproot that aids in drought resistance. Seeds are born in ovoid follicles that dry and split open as the fruit matures. Each seed is attached to a white silky pappus that catches the wind and aids in dispersal.

The genus Asclepias is named for Asclepius, the Greek god of healing because some Asclepias species, such as A. tuberosa, are known to have medicinal properties. The species epithet viridis is Latin for “green.” The common name “antelopehorn” may refer to the plant’s seed pods, which some say resemble the horns of an antelope.

Family: Apocynaceae (Dogbane family)
Native range: Gadsden, Liberty, Levy, Citrus, Hernando, Sumter, Lake, Miami-Dade counties and the Keys
To see where natural populations of Green antelopehorn have been vouchered, visit florida.plantatlas.usf.edu.
Hardiness: Zones 8A–11
Lifespan: Perennial
Soil: Moderately dry to moist, well-drained sandy or calcareous soils
Exposure: Full sun
Growth habit: up to 2’ tall
Propagation: Seed
Garden tips: Green antelopehorn is suitable for use in a butterfly garden or a naturalistic landscape. It is drought tolerant and does well in nutrient-poor soils. Seeds and plants are not typically available commercially.

For more information on other Asclepias species, see these resources: