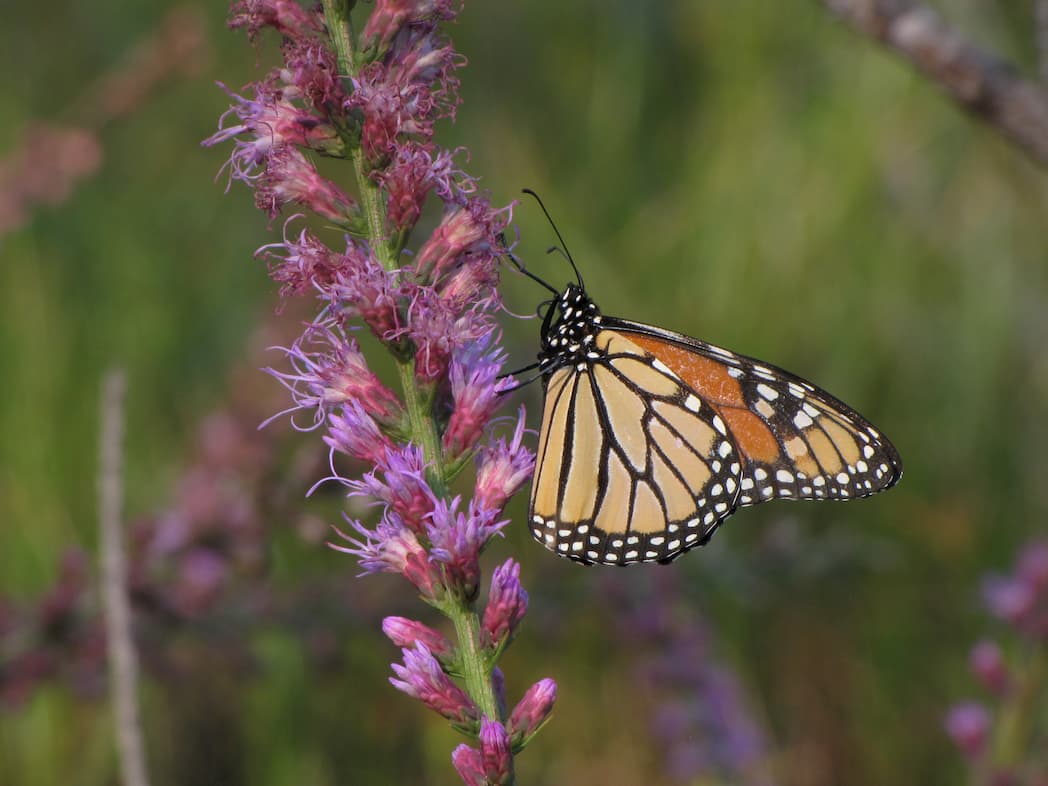 Blazing stars (Liatris), also known as gayfeathers, are showy purple wands of flowers that are hard to miss, even when speeding down an interstate at 70 mph.  They are in the daisy family (Asteraceae) but lack the showy petals typical of plants in this family. Blazing star inflorescences — like some other wildflowers in this family, including goldenrods (Solidago spp.) — are composed solely of disk florets. Disk florets normally are the fertile ones that produce seed, as many of you have seen with the common garden sunflower (Helianthus spp.).

Sixteen blazing star species are native to Florida. The two most common ones are Slender blazing star (Liatris gracilis) and Dense blazing star (Liatris spicata). The former, which occurs in dry areas, grows up to 3 feet tall. In contrast, Dense blazing star is found in moist areas and is much taller, from 2 to 6 feet.  However, the taller the plant, the more susceptible it is to lodging, an agronomic term that refers to the bending over of crops such as wheat and corn. Both species, like all Blazing stars, are very attractive to bees and butterflies.

This should be a good year for blazing stars, with the best places to see them being rural areas. That includes roadsides that traverse natural areas, such as state and national forests and wildlife management areas.

In the Panhandle, especially west of Tallahassee, Hurricane Sally’s effects might reduce displays of wildflowers and grasses due to flooding and wind knocking over all but the shortest of plants.

Nancy Bissett, co-owner of The Natives in Davenport, echoed Claudia’s expectations about North and Central Florida. She noted that, in North Florida, wetland species like Rattlesnakemaster (Eryngium aquaticum) and Cowbane (Oxypolis spp.) were in full bloom and “attracting so many butterflies and other pollinators.” She recommended looking for blooming native wildflowers and grasses in “publicly managed areas where recent burns have occurred, especially in sandhills, flatwoods and dry and wet prairies. After a growing season burn in early summer, our natural areas have spectacular wildflower displays with many different species. “

Check these prior reports for other prime locations to see fall-blooming wildflowers:

Dr. Jeff Norcini serves as a Florida Wildflower Foundation consultant through his business, OecoHort, LLC, and is FDOT’s Wildflower Specialist. Thank you to Nancy Bissett, Roger Hammer and Claudia Larsen for their observations.