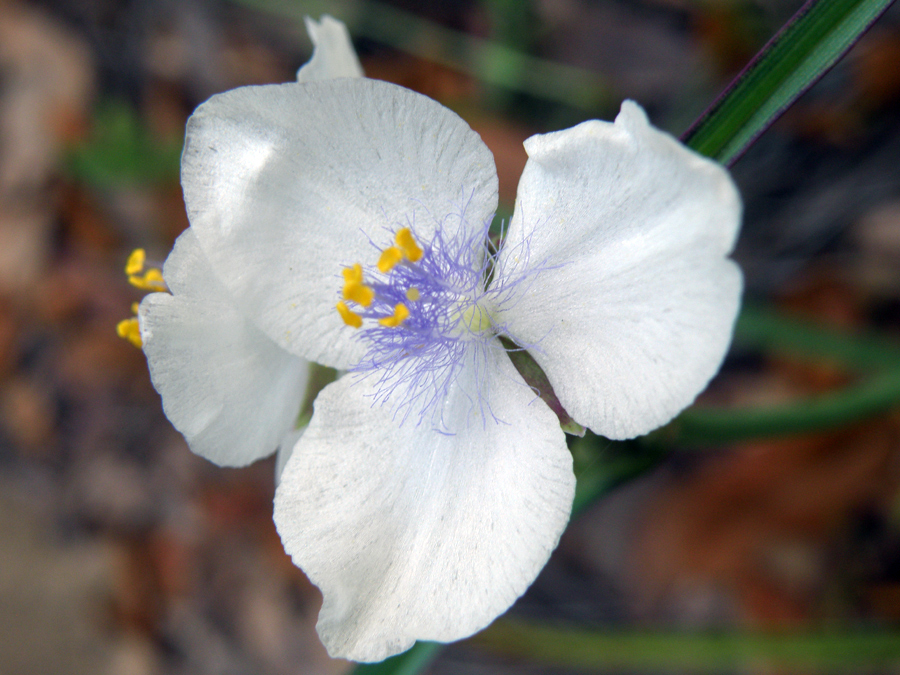 Imagine yourself as a native Indian or early explorer 500 hundred years ago trying to survive in Florida. The better part of your day was probably spent hunting or gathering for daily sustenance, making tools and building shelters. Although artifacts are recovered by archeologists, the list of plants used for food, medicine and spiritual purposes was generally passed down by word of mouth through generations of early Floridians. There is quite a compendium of knowledge about early uses of native trees and shrubs, but what about wildflowers?

Ethnobotany may be described as the historical use of plants by different cultures of people for religious, medicinal and practical purposes. This science is actually a marriage of anthropology and botany as researchers search the past and try to identify plants important to each culture of peoples. Our ancestors had a complex relationship with the land they depended on for survival. (For those interested in a major compilation of these uses, refer to Florida Ethnobotany by Daniel F. Austin.)

Florida’s indigenous Glades Indians traded goods and shared information on plant use, but much of that information was lost when Indian populations declined. Food from native plants included fruits, nuts and leaves that were available throughout the year. According to the Florida Public Archeology Network, Timucuan Indians and early Florida settlers observed nature, like watching what animals ate, to determine uses for plants: spines were removed from Pricklypear cactus (Opuntia humifusa) fruit, and Purple passionflower (Passiflora incarnata) stems and leaves made a relaxing tea. Greenbrier (Smilax sp.) tips and young Pokeweed (Phytolacca americana) leaves were boiled in stews, while the starchy roots of greenbrier and Coontie (Zamia integrifolia) were dried and ground with grains to form flour. Some plants produced colorful dyes that were used for beautifying pottery, clothing and ceremonial face-paint. Cloth was spun from fibers that were processed by boiling Spanish moss (Tillandsia usneoides) to remove its tough outer core. Wiregrass (Aristida stricta) and bluestem (Schizachyrium spp.) were sources of fiber for baskets, as well as Indianhemp (Apocynum cannabinum), a plant from open hammocks in North and Central Florida.

To keep mosquitoes at bay, all you had to do was eat Wild garlic (Allium canadense), lots of it, so a bad odor would emit from your breath, sweat and urine. Thank goodness it was also discovered that simply rubbing Wild garlic directly on skin leaves a pleasant odor and still repels bugs. If garlic is out of season, American beautyberry (Callicarpa americana) leaves also work.

Many common and scientific plant names reflect local uses for plants. Our state wildflower, Coreopsis, is called tickseed because the seeds are small and black like ticks. Some settlers used Coreopsis in their mattresses to help repel ticks and bedbugs. Plant fiber and dyes from flowers and leaves were used for textiles, while baskets were created with leaves, stems, grasses and vines like hempvine (Mikania sp). Some of the remedies were used in traditional religious rituals.

Although ethnobotany is steeped in the past, it is still relevant today as we grow more wary of processed and chemically laced foods in our diets. The forward to Florida’s Incredible Wild Edibles by Peggy Sias Lantz states, “Florida’s varying habitats are blessed with a wide variety of native plant species with roots, stems, leaves, flowers, fruit and seeds that provide good and interesting food for people.” This is one of my favorite little books, in which Lantz lists dozens of Florida plants that can be used in salads, stews (potherbs) and beverages.

A bounty in our backyards

Want to diversify that lettuce in your bowl? Add a sprinkling of tender young leaves from Meadowbeauty (Rhexia virginica), Pickerelweed (Pontederia cordata), and Spanish needle (Bidens alba). Don’t forget the garnish — sliced tubers of Florida betony (Stachys floridana) and Partridgeberries (Mitchella repens) will add a nice crunch. Decorating a cake? Sprinkle it with flowers of Common blue violet (Viola sororia), Swamp rose (Rosa palustris) or Spiderwort (Tradescantia ohiensis), which are all edible. If you are interested in sustainable farming, Spiderwort also provides an endless supply of young shoots that can be steamed and buttered like asparagus — yummy!

If you live on a lake, you will be glad to know that three species of waterlily are edible: American lotus (Nelumbo lutea), White waterlily (Nymphaea odorata), and Yellow pondlily (Nuphar advena formerly N. lutea). Unopened flowers and uncurled leaves can be boiled and buttered, unripe seeds from the pods can be boiled or roasted. And if you don’t mind wading, the roots can be harvested in winter and eaten like sweet potatoes. Please refer to the book for specific recipes!

In the 1920s and ’30s, folk medicine played a large role in treating common ailments and plant foods were valued for cleaning and building blood, cleansing the bowels, and as a source for vitamins and minerals. A definition of herbal remedies states they are “therapeutic compounds that occur naturally in plants.” Plant parts contain many chemicals that were thought to relieve certain ailments, although some remedies were based more on folklore than medical research.

There are seven categories of medicinal compounds in plants: alkaloids, glycosides, phenols, organic acids, resins and gums, saponins and essential oils. Traditional herbal remedies could include several types of plants that were carefully combined for a specific dosage. Several wildflowers were used as treatments for snakebite, fevers, bronchial problems and skin infections. Leaves were made into a fresh tea or mixed with other ingredients to form syrups or healing tinctures. Roots and plant barks from Butterfly milkweed (Asclepias tuberosa), also known as pluerisy root, were used for internal problems and was sold as a diaphoretic and expectorant. The shape of plant parts that resembled human organs may also have dictated the specific uses for many native plants.

Unfortunately, the need for wild-crafted remedies, especially in the Appalachians, resulted in harvests that decimated wild plant populations.

By the 1940s, the University of Florida School of Pharmacy was receiving many requests for information on methods of collecting native medicinal plants and preparing them for market. University of Florida Bulletin No. 14, “Collection and Cultivation of Medicinal Plants in Florida,” states, “This work can be done by farmers during their spare time and much of it can be done by women and children. There are some instances where families in the State have tided over crucial financial situations by collecting plant drugs for market.”

The school maintained a 10-acre medicinal plant garden, three acres of which were kept in a natural state. Research was conducted to determine if wild plants could be maintained under cultivation, with concurring yield and quality measurements.

Bulletin no. 14 also describes how to dry, clean and pack plants, including treatment in a tight barrel with a few drops of chloroform to kill insects. Growers could then ship to crude drug dealers like the Lahomach Seed Co. in St Augustine, Mr. O.C. Bauman in Deland, or R.C. Burns in Canaveral. Collectors were warned to never send an entire lot of drugs to dealers without previous correspondence that discussed drug quality and pricing.

Vanillaleaf (Carphephorus odoratissimus) was collected throughout Central Florida, especially in Sanford. The leaves contain coumarin, which was used to add flavor and fragrance to tobacco. Florida plants were preferred for their finer aroma and color. Two hundred- to 400-pound bales were prepared by machines and some drug dealers sold 40 to 50 tons a year.

Roots of Wild indigo (Baptisia spp.) were used as a dye and also had medicinal value as a stimulant. Flowers and berries of Elderberry and Pokeweed had diaphoretic and alterative powers. Yellow jessamine (Gelsemium sempervirens) rhizomes and roots were dried and cut into pieces and later prepared as a nervine. Queensdelight (Stillingia sylvatica) was used to treat many conditions including skin diseases, constipation, and laryngitis. It was found in Alachua and Marion counties where roots were dug in the fall after tops had died.

Scientists today are evaluating compounds found in Florida wildflowers and other plants throughout the world for potential cures of diseases. In the United States, of the top 150 prescription drugs, at least 118 are based on natural sources. According to the National Cancer Institute, at least 70 percent of new drugs introduced in the United States in the last 25 years are derived from natural sources, and plant-derived anti-cancer drugs save at least 30,000 lives per year in the U.S. alone.

As you can see, loss of our Florida habitat is not only a conservation issue; it may also limit potential opportunities for medical and other rare finds. Don’t worry about over-harvesting —after identifying chemical compounds in plants, scientists can usually synthesize them for pharmaceutical production. This includes callicarpenal and intermedeol; synthesized in 2006 by the U.S. Department of Agriculture, these chemicals are apparently a great mosquito deterrent. Yay! I won’t have to smear that Wild garlic all over me after all!

Please note: This article is not intended to advise readers on wildflowers for uses other than gardening, since historical information on ethnobotany is mostly untested by science.