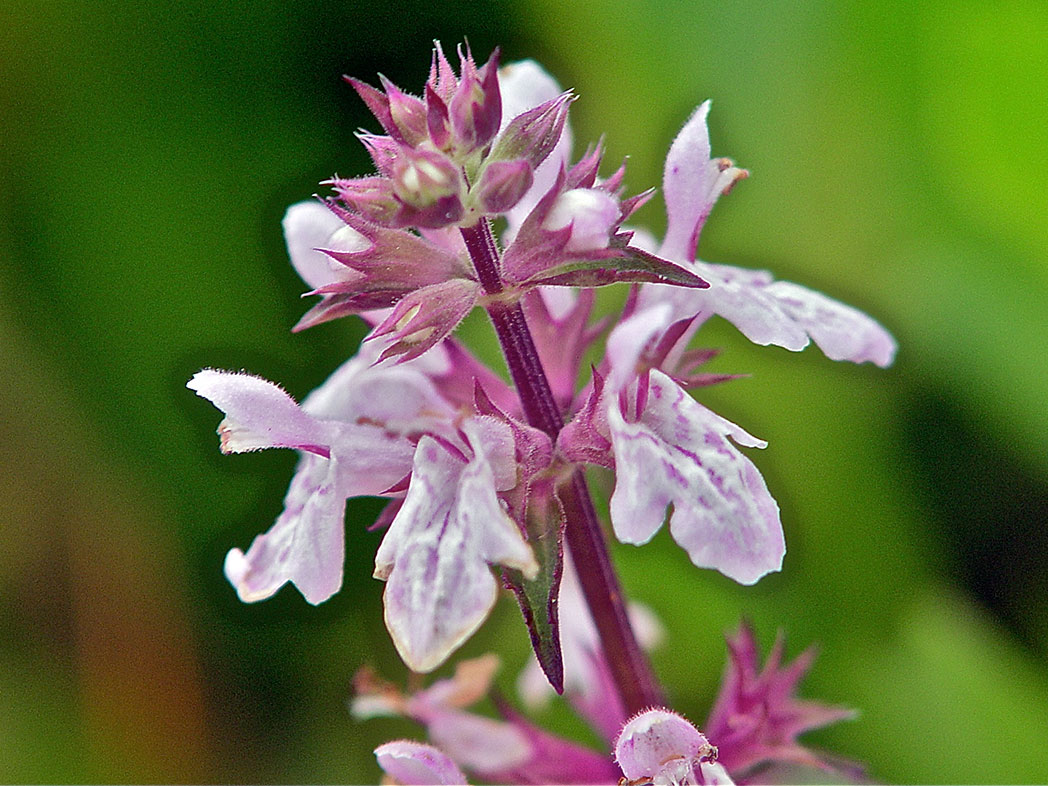 Florida betony (Stachys floridana) often gets a bad rap because it spreads so prolifically, especially in moist turf lawns. But it is a wonderful native wildflower for attracting bees and butterflies, and is also almost entirely edible to humans. Its young leaves and stems can be cooked like greens or dried and made into a tea, and the seeds can be eaten raw. However, the star of this plant is its crunchy, radish-like tuber. Eat it raw or pickled, but be sure to harvest in spring when it is white and crisp. In summer heat, it turns tan in color and softens, losing its palatability.

Florida botany is also known as Rattlesnakeweed, which describes its “rattle”-like tuber. The genus name Stachys is Greek for “ear of grain” and alludes to the flower spike, while the species epithet floridana references Florida, where the plant was first identified. Florida betony was considered endemic to Florida until the 1940s, when it began spreading north. It is now found from Virginia to Texas and is largely considered an aggressive weed.

Florida betony’s pinkish- to purplish-white flowers are tubular and two-lipped. Lower lips have pink to purple spots or stripes. Flowers emerge from leaf axils and grow on spikes in whorls of 3 to 6. Calyces are hairy and tubular. Sepals have pointed lobes and may have a pink or purple tinge. Leaves are oblong to cordate base and crenate margins. They are oppositely arranged. Aboveground stems are square, erect and hairy. A network of underground stems produce white, segmented tubers that are usually 1–3 inches long. They resemble a rattlesnake’s rattle or a large grub. The fruit is a schizocarp that bears four nutlets.

Family: Lamiaceae (Mint family)
Native range: Nearly throughout
To see where natural populations of Florida betony have been vouchered, visit florida.plantatlas.usf.edu.
Lifespan: Perennial
Hardiness: Zones 8A–10B
Soil: Moist to wet sandy or loamy soils
Exposure: Full sun to full shade
Growth habit: 1–2′ tall
Garden tips: Florida betony’s aggressive and spreading habit make it difficult to control in a wildflower garden or formal setting. It is, however, an excellent component of a freedom lawn, as it can be mowed without impact.

Plants are occasionally available at nurseries that specialize in native plants. Visit PlantRealfForida.org to find a nursery near you.