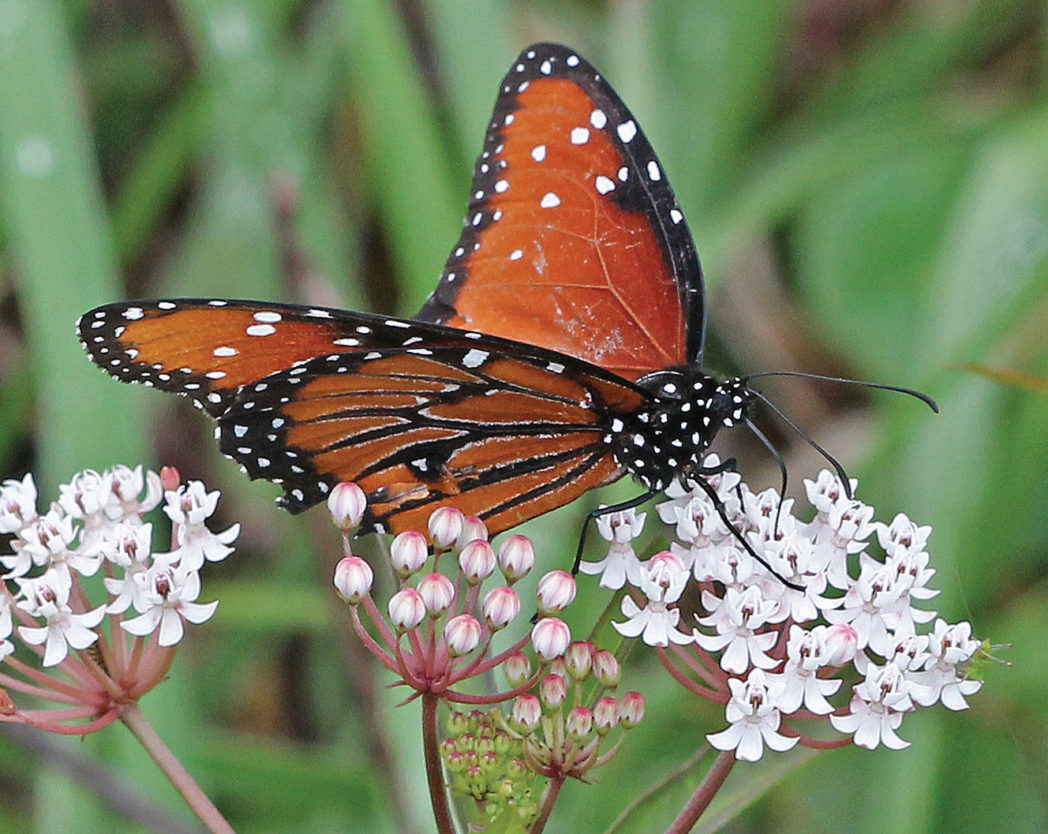 “Know your native pollinators” is a series of articles that will help you identify and appreciate Florida’s varied pollinators, including bees, wasps, butterflies, moths, beetles, flies, birds and bats. Pictured above: Queen butterfly on Swamp milkweed (Asclepias incarnata)  by Mary Keim.

Queen butterflies are similar in appearance to the well-known Monarch butterflies and are often mistaken for them. Learn the differences between these royally-named cousins.

A little smaller than Monarchs, the wingspan of the Queen butterfly is 6.7–9.8 cm. Both species have orange-brown coloration, although Monarchs are lighter and more orange. Similar to the Monarch, the underside of the Queen’s hindwing has black veins and borders, and two rows of white spots along the border. The underside of the Queen’s forewing does not contain these black veins. The dinstinction between the two species is most obvious when their wings are open. Monarchs display black veins, whereas Queens lack these bold black lines on the upper side of the wing. Like Monarchs, Queen males have two pheromone scales on the upper-side of their hindwing.

The Queen also bears a great resemblance to Viceroy and Soldier butterflies. Viceroys, like Monarchs, have dark veins across the upper side of the wing. The Soldier is perhaps the most similar to the Queen butterfly, but still has slightly more defined veins on its upper side.

As with the Monarch, milkweed (Asclepias spp.) is an important host plant for the Queen caterpillar. The toxins in these plants stay within the caterpillar and butterfly, making them unpalatable to predators — especially birds. Florida Viceroy butterflies, although harmless, mimic the look of the Queen, hoping to fool avian predators.

Queen butterflies are found in peninsular Florida throughout the year. Their range stretches from the southern United States through the West Indies and Central America, south to Argentina. Favorite habitats of the Queen are open and sunny, including fields, dunes, deserts, pastures, roadsides and along waterways.

The Queen caterpillar is yellow, white and black, almost identical to a Monarch caterpillar, but identifiable through the third set of filaments in its mid-section. These filaments are sensory organs called tentacles that “see” through touch.

The chrysalis is soft when first formed and could be damaged if touched. Within a day, the chrysalis will harden and become either green or pink. The hardened chrysalis is safe to touch as long as hands are free of pesticides. The Queen’s chrysalis is a smaller version of the Monarch’s.