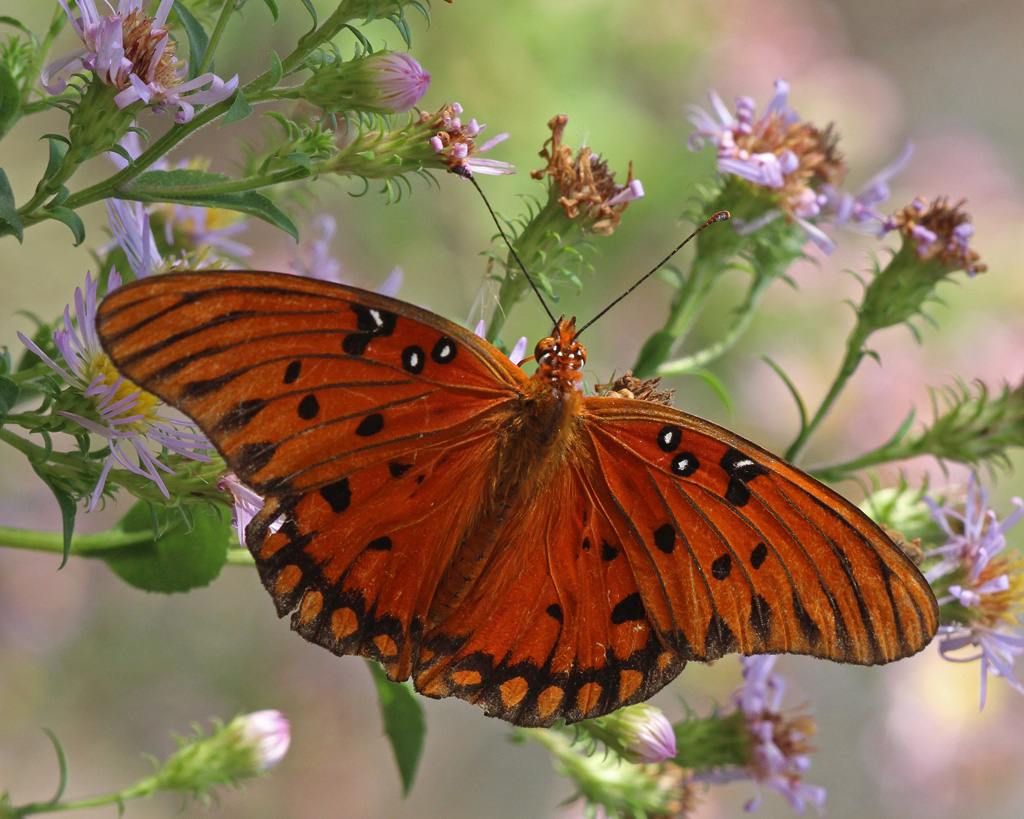 “Know your native pollinators” is a series of articles that will help you identify and appreciate Florida’s varied pollinators, including bees, wasps, butterflies, moths, beetles, flies, birds and bats. Pictured above: Gulf fritillary on Elliott’s aster (Symphyotricum elliotti) by Mary Keim.

The Gulf fritillary is sometimes known as the Passion butterfly — so named because of its ardor for Passionflower. You will find so much to love about this unique pollinator!

The Gulf fritillary is part of the “brush-footed” butterfly family (Nymphalidae), referring to the genetic trait of short hairs on the front of its legs.

Gulf fritillaries have a rapid, erratic flight and generally stay above human eye level until they are attracted to a flowering plant down below.

Gulf fritillaries are medium-sized butterflies with elongated forewings. Their wingspan extends between 65 and 95 millimeters long. The surface of the upper wing is bright orange with black markings. The undersides of the wings are brown with a red blush color near the base. In the forewing cell, three black-rimmed white spots are visible on the top and underside. Gulf fritillaries have a black “comma“ on their hindwing with white oblong shapes, one of which is broken. Their bodies are long, slender and orange with white stripes. They have orange eyes, white freckles on their head and a white jaw extending up. Females are larger, darker and have more extensive markings than their male counterparts.

Members of the Heliconiinae family are sometimes referred to as longwing butterflies.

Gulf fritillary butterflies live in the extreme southern United States. Outside of the U.S., they are a broad-ranging species, found throughout Mexico, Central America, the Caribbean and into South America.

They begin their journey by migrating northward from Texas and Florida to more northern parts of the southeastern U.S. such as North Carolina and Alabama for temporary breeding grounds. Gulf fritillaries occasionally venture into the Central U.S, however they cannot survive in temperatures below 21 degrees Fahrenheit. In late summer and early fall, peninsular Florida sees huge numbers of these butterflies return. Despite the migration of many, adult Gulf fritillaries can be found in southern Florida throughout the year.

Gulf fritillaries enjoy a variety of habitat including sunny roadsides, disturbed areas, edges, fields, pastures, woodlands, second-growth semitropical forests and urban areas like parks and yards. You may even find them blithely floating around your butterfly garden.

Gulf fritillary butterflies can be found in all 67 counties of Florida.

Gulf fritillaries lay yellow eggs singly on or near the host plant — generally the leaves, stems and tendrils of passionflowers. Caterpillars are orange to reddish-brown with orange-brown stripes and black spines. The pupa stage is mottled brown and resembles a dead leaf. The butterflies produce multiple generations each year.

When it is disturbed, the Gulf fritillary releases chemicals from its abdominal glands, producing an unpleasant odor. This dissuades many birds and other predators from making the butterfly into a snack. If a predator does decide to have a Gulf fritillary lunch, they do so at their own risk. Most of the passionflower plant that the caterpillar feasts on, including the leaves and stems, contains toxins that stay in the bodies of the Gulf fritillary larva and adult butterfly. The toxins are lethal to unsuspecting predators not equipped with the same immunities. The butterfly’s bright orange coloration acts as a warning that it should be avoided.

Caution: Do not confuse this with its non-native relative, Lantana camara, which has larger, more colorful blooms, but is highly invasive and thus should be avoided. Lantana camara is the species typically found at big box retail garden centers. Be sure to inquire with staff to ensure you are purchasing the native species, or visit a nursery that specializes in native plants. Visit PlantRealFlorida.org to find a nursery in your area that specializes in native plants. For more information on the invasive Lantana camara, visit the UF/IFAS Center for Aquatic and Invasive Plants’ species page.