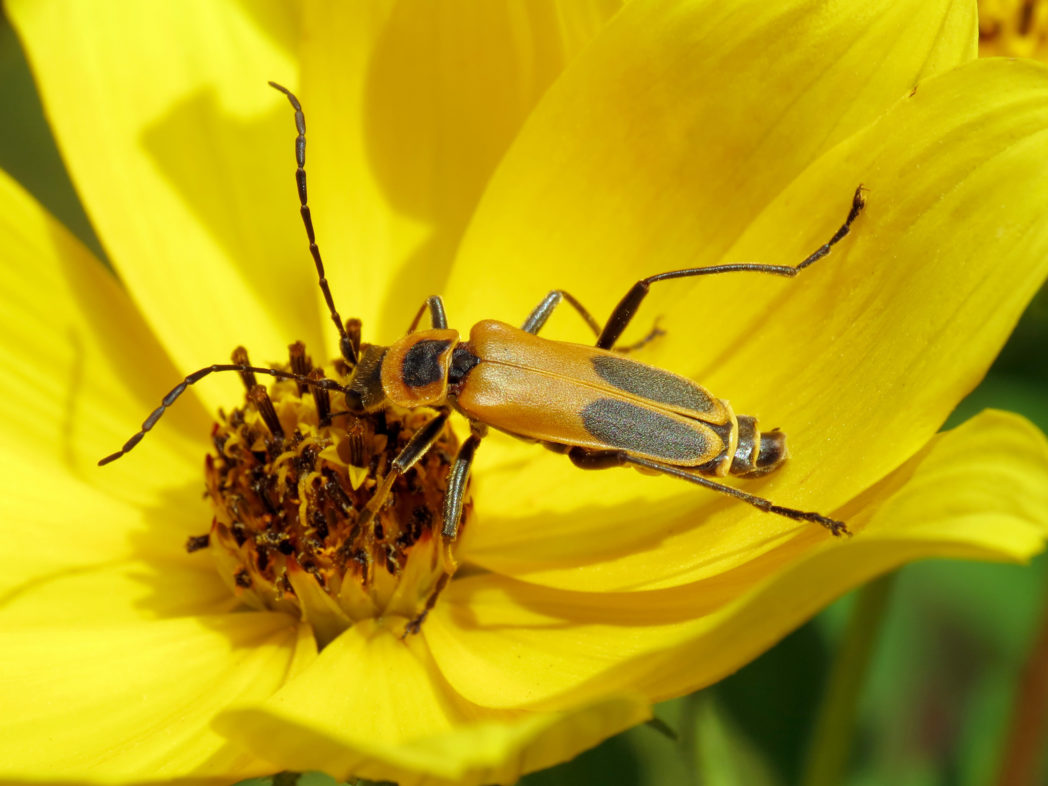 “Know your native pollinators” is a series of articles that will help you identify and appreciate Florida’s varied pollinators, including bees, wasps, butterflies, moths, beetles, flies, birds and bats. The leathery wing covers of Goldenrod soldier beetles don’t quite cover the tip of their abdomens. Photo by Katja Schulz CC BY 2.0.

Goldenrod soldier beetles feed on the nectar and pollen of a wide variety of flowers, but goldenrod species are a particular favorite.

Soldier beetles in the genus Chauliognathus earned their name from their red and black coloration, similar to British military uniforms in the 17th and 18th centuries.

Goldenrod soldier beetles are found throughout Florida and most of the United States. Their populations peak in late summer and early fall, perfectly timed with the bloom of goldenrod. These common beetles prefer sunny spots with rich nectar sources, such as gardens, fields and roadsides.

Goldenrod soldier beetles are about ½ inch in length and are a beautiful burnt orange with black accents. (What appropriate fall colors!) Their head and legs are completely black, and they have two black spots on their thorax and wings. Their wings form an inverted “V” at the base and don’t quite cover the tip of their abdomen, making them appear as if they’re dressed in tiny tailcoats. Unlike most beetles, which have hard wing covers (elytra), soldier beetles have soft elytra, earning them the name “leatherwings.”

Soldier beetles are frequently confused for Blister beetles (Meloidae family). Adult Blister beetles commonly feed on flowers and leaves, and as their name suggests, they secrete defensive chemicals that cause blistering. Soldier beetles, on the other hand, are not considered a threat to humans, and they’re beneficial to have around the garden.

Can you see the yellow pollen stuck to the bodies of these Goldenrod soldier beetles? Photo by Judy Gallagher CC BY 2.0.

Adult soldier beetles feed on nectar and pollen, but they are also predators of plant pests like aphids, caterpillars and other insect eggs. Although they frequently show up in large numbers, Goldenrod soldier beetles do not damage plants and are harmless to humans.

If you’re a beetle, flowers are also a great place to find a mate. In fact, you will frequently see them feeding and mating at the same time! As they travel to new flowers in search of dinner and a date, pollination ensues.

Once mated, adult females lay eggs in the soil or in leaf litter. Larvae are dark in color and covered in short, dense hairs. They are voracious predators that feed on grasshopper eggs and soft-bodied insects such as aphids and caterpillars — meaning the larvae are also beneficial to have around!

Larvae overwinter as pupae in leaf litter or rotten logs, and emerge as adults in summer.

Don’t blame goldenrod for your allergies! Insect-pollinated goldenrod is not a significant allergen. Wind-pollinated ragweed blooms at the time as goldenrod and is more likely the culprit behind your itchy eyes and runny nose.