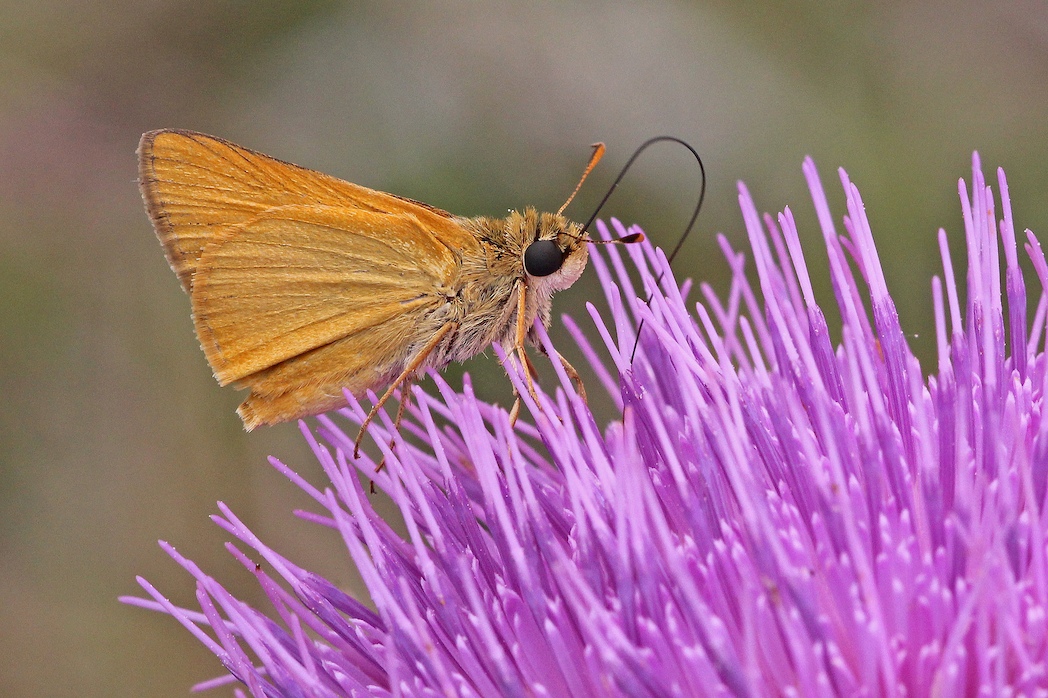 “Know your native pollinators” is a series of articles that will help you identify and appreciate Florida’s varied pollinators, including bees, wasps, butterflies, moths, beetles, flies, birds and bats. Pictured above: Delaware skipper on Purple thistle (Cirsium horridulum) by Mary Keim.

While the Delaware skipper nectars on many kinds of flowers, it is most attracted to flowers that are white and pink.

The Delaware skipper is bright orange with a small wingspan of 1–1 ½ inches. The upper side of each wing has a black border and black veins near the margins. The underside of the wing has no markings, but veins may be dark orange. The forewing has a black bar toward the end of the wing. Female Delaware skippers have darker markings and wider borders.

This species is just one of 130 –140 species of grass skipper (Hesperiinae) in North America. As their name implies, grass skipper larvae feed on sedges and grasses.

Delaware skippers are attracted to grassy meadows and wet areas, but can be found in almost any habitat, including dry pine forests, sawgrass bogs, marshes, fields, roadsides and gardens.

Delaware skippers commonly rest with forewings held upright in a V shape, a characteristic of most grass skippers.

In Florida, Delaware skippers may produce several broods from February until October. Further north, only one or two broods are produced. Females deposit white eggs singly on the host plant. Host grasses include Big bluestem (Andropogon gerardii), Switchgrass (Panicum virgatum) and Silver plumegrass (Saccharum alopecuroides). Caterpillars use these leaves to make nests. Delaware skipper larvae are bluish-white with black dots and a crescent-shaped bar at the rear. Their head is white with black bands.

Males await interested females by perching 1½ feet off the ground in open grassy areas or along streams.