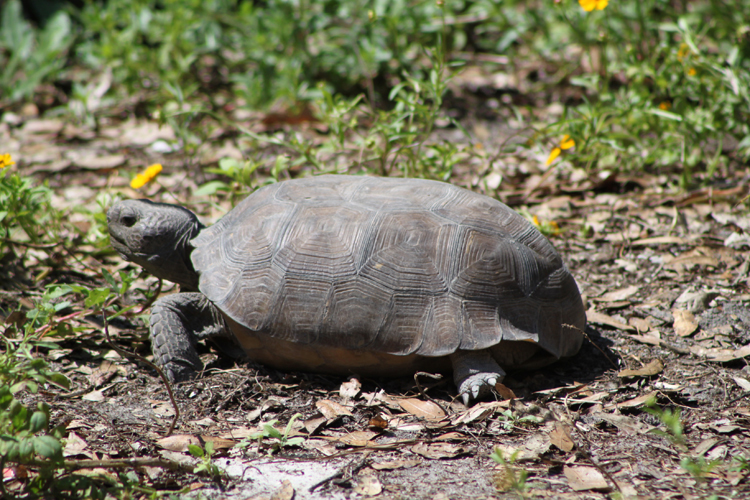 Many of us have had the pleasure of seeing gopher tortoises (or at least their burrows) on nature walks. They live in every county in Florida, and although they are associated with dry sandhills, they may also be found in many diverse areas such as pine flatwoods, oak hammocks, scrub areas and coastal dunes. Open pastures and vacant lots can also be a refuge for them. Gopher tortoises (Gopherus polyphemus) prefer sunny open land with sandy soil that is also conducive to the growth of many of our Florida wildflowers. So it is no surprise that wildflowers make up a significant portion of their diet.

The Gopher Tortoise Council has compiled an extensive list of plants used by the tortoises for food sources, and reports that about one third of the adult diet consists of grasses such as bluestem (Andropogon spp.), witchgrass (Dicanthelium spp.), crowngrass (Paspalum spp.) and threeawn (Aristida spp.). Other favorites are silkgrass (Pityopsis spp.), milkpea vine (Galactia spp.), and leaves of pines and oaks that have dropped to the ground. Popular wildflower munchables include a number of plants in the aster, buckwheat and pea families, as well as twinflower (Dyschoriste spp.) and their all-time favorite, stinging nettles (Cnidoscolus stimulosus). (A link to the complete list of forage plant species can be found at the end of this article.)

Much of what we know about the gopher tortoise’s life cycle and daily habits has been compiled from years of observation by the Ashton Biodiversity Research and Preservation Institute in Newberry. The Institute was an early proponent of tortoise mitigation, which saved doomed populations from being bulldozed underground by developers. Director Pat Ashton tells of countless hours in which students, strapped high into pine trees, watched gopher tortoises, and recorded their every movement and everything they ate.

According to Pat, gopher tortoises enjoy a wide assortment of up to 200 plant species from 38 plant families, including the ripe fruits of pawpaw, persimmon and pricklypear cactus, and a variety of tender coastal succulents, as well. Although you may occasionally see gopher tortoises reaching toward the berries of a saw palmetto, they are actually trying to catch insects flying around the fruit.

Gopher tortoises are also native plant gardeners! They create their own forage farms by excreting seeds on the fresh sand ledge around the home burrow entrance created in the excavation process. Nearby plants germinate, contributing to their own backyard edible garden.

The Florida Fish and Wildlife Conservation Commission (FWC) assisted in getting the gopher tortoise (Gopherus polyphemus) reclassified as a threatened species in 2007 when it became apparent that the populations were declining because of human encroachment. With the help of notable researchers and environmentalists, FWC developed plans to manage current populations and protect them from destruction, such as when their holes are filled and tortoises are buried during construction processes. The technology of very small motion-sensor cameras inserted into their tunnels have documented more than 350 other small mammals, reptiles, amphibians and insects that cohabitate underground, making the tortoise habitat even more important for broader conservation concerns.

Today the tortoises, their eggs and burrows are protected by law from damage, destruction or harassment. Permits must be obtained from FWC to handle or move these gentle animals before land clearing begins. There is also a phone and email hotline on the FWC website to report violations.

If you are interested in training programs for gopher tortoise relocation and management, you may contact Wildlands Conservation in Venice, FL. Classes include survey techniques; methods to mark, transport and release tortoises; and supervision of burrow excavations. They also provide education and research opportunities for students and researchers.

Urbanization has created many “islands” of fragmented gopher tortoise habitat across Florida. Your yard or nearby undeveloped property can be a safe haven for them, and living with them can be accomplished if you protect the burrows from dogs, avoid driving within 30 feet, and avoid mowing directly around the entrance. Do not fence the area – allow free access. Note: There may be two entrances to the burrow. Some homeowners plant gopher tortoise-friendly grasses and wildflowers near their holes. (Don’t forget those stinging nettles!) They usually forage about 160 feet (sometimes more) from their home. Tortoises that lived in pastures near me have moved into my garden, and I often see them walking between the raised beds of vegetables en route to the wildflowers I have planted nearby. I notice they are quite adventurous browsers and will taste just about anything they walk by, but they do have favorite preferences and will pass by a skullcap for an elephant’s foot. I don’t mind sharing because they munch on leaves without pulling the plants out of the soil. One helpful visitor trimmed all of the frogfruit I had growing in pots. Unfortunately, my milkweeds were also delicious.