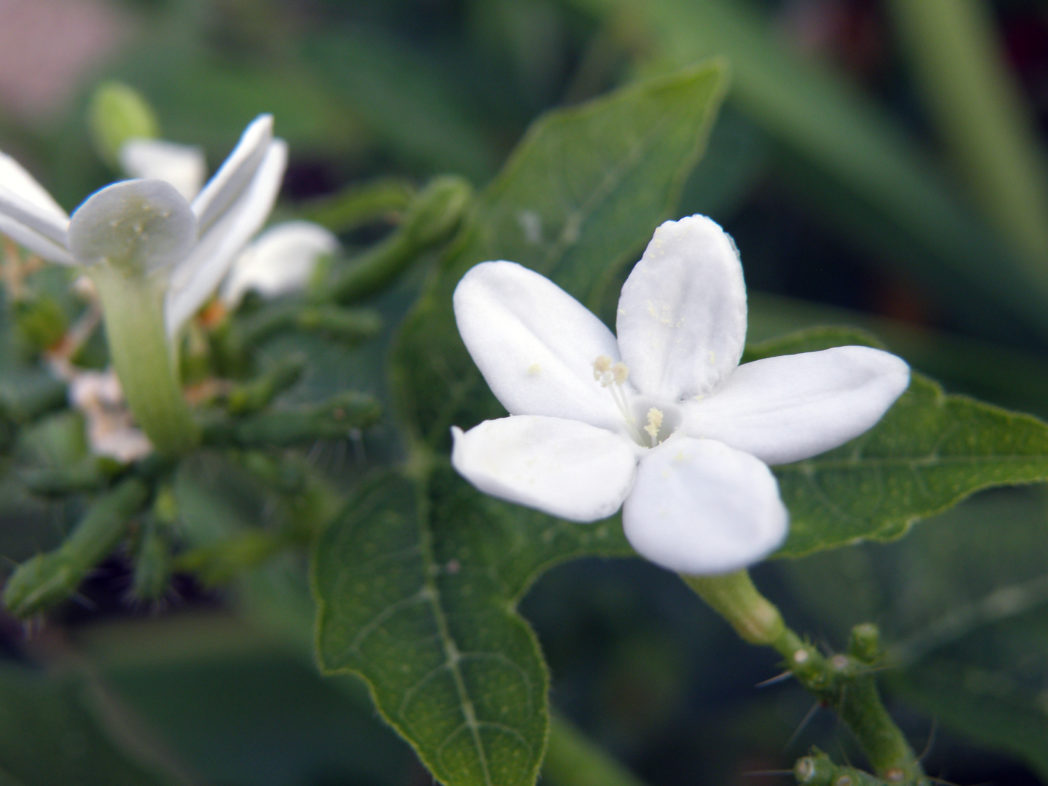 Tread-softly is a perennial, low-growing herbaceous wildflower. Its brilliant white blooms are slightly deceiving in that they have no petals. Rather, the “flower” consists of five, petal-like sepals. Its alternately arranged leaves are deeply lobed and dark green with contrasting palmate veins. As its name suggests, one must tread softly around this plant or else risk being stung by the many stinging hairs that cover its leaves, stems, seeds and even  flowers. The hairs contain an irritant that can cause a rash in some people. Despite its stinging hairs and its inclusion in the spurge family, tread-softly is not a true nettle. It does, however, produce the milky sap common to other members of the Euphorbiaceae family.

Tread-softly is known to flower year-round. It occurs naturally in sandhills, scrub, pine and scrubby flatwoods, and ruderal and disturbed areas. It attracts many butterflies and other pollinators.

It’s easy to see how Tread-softly gets its common name, and its scientific name is just as telling. The genus name Cnidoscolus is derived from the Greek cnid, meaning “nettle” and scolus, meaning “thorn.” The species epithet comes from the Latin stimul, meaning “to goad, prod or urge,” as in a “stimulus.”

Family: Euphorbiaceae (Spurge family)
Native range: nearly throughout Florida
To see where natural populations of tread-softly have been vouchered, visit florida.plantatlas.usf.edu.
Hardiness: Zones 8A–11
Soil: Sandy, well-drained soils
Exposure: Full sun to minimal shade
Growth habit: 1+’ tall, up to 1’ wide
Propagation: Seed
Garden tips: Its interesting foliage, potential for year-round blooms and relatively low maintenance requirements makes Tread-soflty a nice addition to a wildflower garden. However, a severe allergic reaction may occur in some people if their skin comes in contact with the plant’s hairs. Use caution when working with this plant.