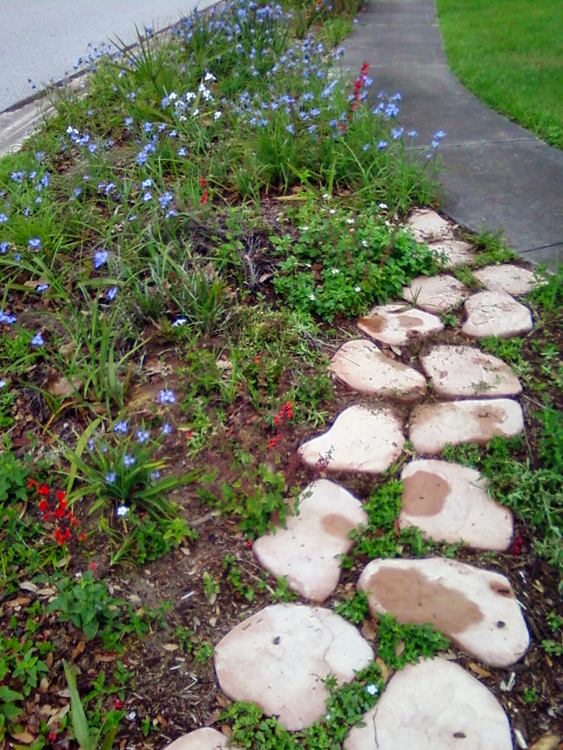 The Wildflowers, Naturally! program was launched to recognize gardens throughout the state that have areas dedicated to native wildflowers, flowering shrubs and trees. One of the first to apply for recognition was Roger Agness of Orlando.

Roger’s yard is a work in progress, but he’s already covered more than 3000 square feet with native wildflowers and plants. It all started with two large patches of dirt in front of his house — one, the result of a neighbor accidentally crashing into his mailbox; the other, from a tree removed by the county. Instead of sod, he decided to fill the spots with wildflowers.

Roger has always been around gardens. His grandmothers and mother all had vegetable gardens. “I don’t like vegetables all that much,” noted Roger, “so I have a flower garden, full of Florida native plants.” He said he chose native plants because “they are from Florida, so they are used to our heat, rainfall and bugs, and don’t need to be sprayed, watered or coddled. Plus, they provide food and shelter for butterflies, hummingbirds and bees.”

Of his garden, Roger said, “It gets me outside, helps me connect with nature. It is kind of fun to get down and pull out the occasional weed. And it’s nice because I never have to water it! Because they are Florida native plants, they are used to Florida’s rain/no-rain cycles.”

With the success of his initial plantings, Roger has increased his garden to include the 300-foot-long grassy strip between his sidewalk and the street. He now has more than 40 species of native wildflowers and plants growing in his yard. In addition, he has started a rain garden near his front porch, and is in the process of planting along the north side of his house,  all the way from the sidewalk and “past the kitchen window… so I’ll have something to look at during breakfast.”

Aside from the aesthetics and the benefits to pollinators and wildlife, his garden has given him personal insight: “My garden teaches me a lot, even about my own personal life and character. Some weeds may be big and showy or even scary, but they pull right up because they have little roots to hold them in. Some weeds need to be watched over and pulled out every few days in order to keep ahead of them, or they’ll take over. And some weeds are small and inconspicuous… until suddenly, the ground is covered with them. My life is like that, I need to watch the bad habits and get rid of them, and take care of the good habits.”

Roger says, “Best of all, it is nice that my Florida native plants are so prolific, because then I can give them away to my neighbors. In a short time, I will have spread flowers and happiness all over my subdivision.”