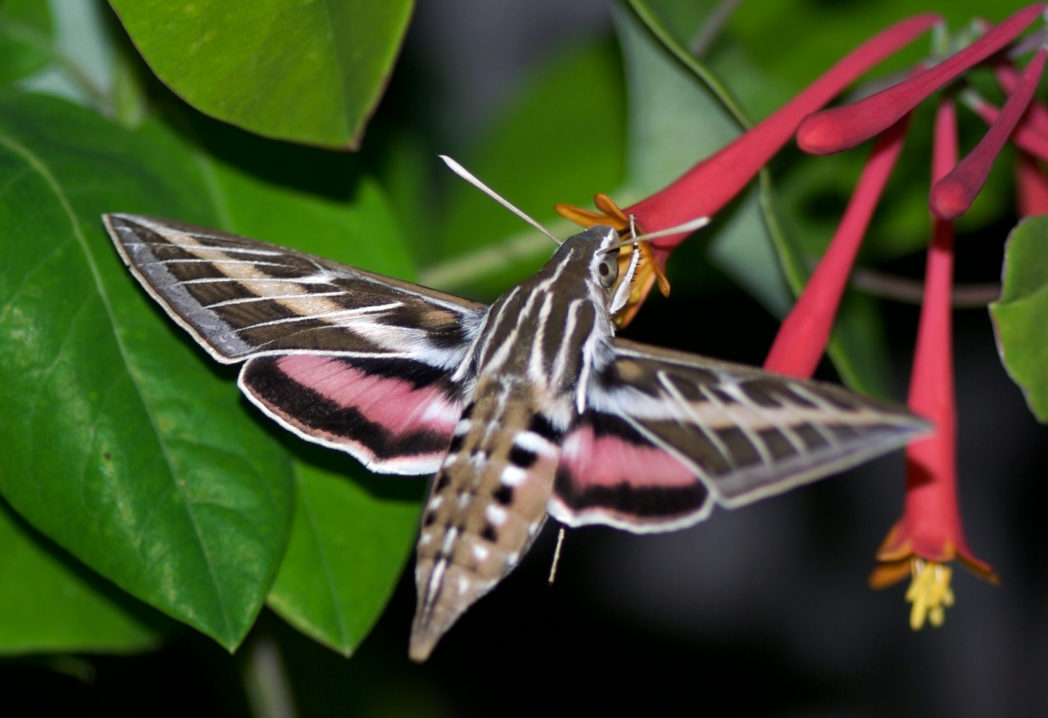 White-lined sphinx moths will forage on a wide variety of flowers. Their long tongues make them well-adapted to sip nectar from long-necked flowers, and they are common visitors of night-blooming flowers.

The common name “Sphinx moth” was given to this group because of their caterpillar’s resting position. It sits with the front part of its body raised in the air, much like the Great Sphinx of Egypt.

White-lined sphinx moths can be found throughout the world, but are especially common in North America. They live in habitats ranging from desert to tropics, and feed on nectar from a variety of long-necked flowers.

Like most moths in this family, White-lined sphinx moths are fast fliers, clocking in at around 25 mph. They have triangular wings and thick bodies that taper to a point, much like a small jet. In addition to fast flight, these insects can hover in mid-air, and are frequently confused for hummingbirds when sipping nectar from flowers. Their powerful wings beat so quickly, they make a distinct humming sound.

But don’t let their bold features fool you. Despite their fast flight, exceedingly long tongues and sharply pointed bodies, these friendly insects cannot bite or sting.

Adults may be active any time of the day or night, but are most frequently spotted at dusk. At first glance, it’s easy to mistake these large, hovering insects for hummingbirds. But if you look closely, you’ll see the moth’s long proboscis extended into the flower probing for nectar. Like hummingbirds, these sphinx moths will dart from flower to flower so quickly that they may not even take the time to roll their long tongue back up under their head between flower visits.

Adults will feed on a wide variety of flowers in their search for energy-rich nectar. They’re long tongues are especially well-suited to feed from long, tubular flowers.

Most caterpillars in the Sphingidae family have a distinctive horn at the tip of their abdomen. Photo by Joseph Berger, Bugwood.org (CC BY-3.0 US)

Caterpillars have a small horn on the last segment of their body, distinctive to the Sphingidae family. An adult moth can lay hundreds of eggs, and the developing larvae will feed on a wide variety of plants, trees and shrubs. Although they are rarely considered garden pests, evening primrose (Oenothera spp.) is a particular favorite for this group.

When it’s had enough to eat, the caterpillar will crawl off of its food source and burrow into the soil to pupate. Most will overwinter there until they emerge as adults the following spring. Throughout most of North America, White-lined sphinx moths produce two generations a year. In warmer climates (like Florida), they may have more.