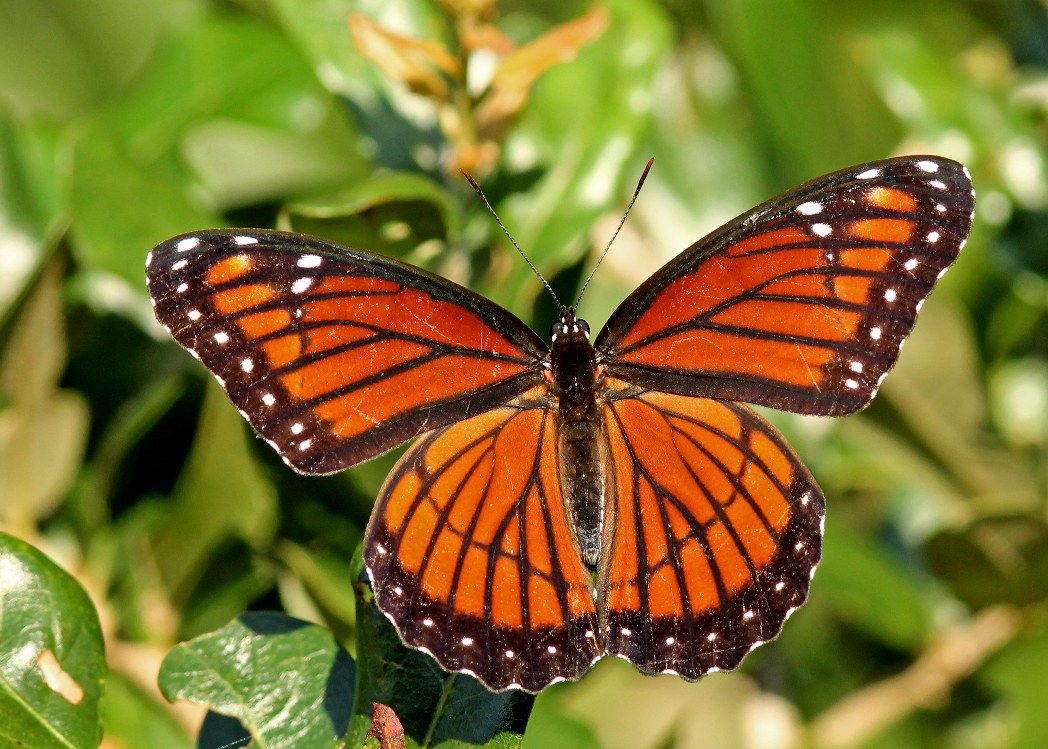 “Know your native pollinators” is a series of articles that will help you identify and appreciate Florida’s varied pollinators, including bees, wasps, butterflies, moths, beetles, flies, birds and bats. Pictured above: Viceroy (Limenitis archippus) by Mary Keim.

Viceroy butterflies are so-named for their resemblance to Monarch butterflies. Since Viceroys are smaller than Monarchs, the names play on the lower status of viceroy officials compared to their ruling leaders.

The Viceroy butterfly’s wingspan is 2.6 – 3 inches. Viceroys are quicker and more erratic than Monarchs in flight. They typically will fly in a flap, flap, glide pattern while Monarchs will just float. There is no visible difference between sexes of Viceroys. When wings are open, the dorsal side has an orange base with black patterns. Although similar to the Monarch, a distinctive pattern for the Viceroy is the black line across the secondary wings. Viceroys have a single row of white dots alongside the black marginal band. With their wings closed, the ventral side is a mirror of the dorsal, except the hindwings have a lighter base color. The Florida population of viceroys can be more reddish-brown, and mimics Queen and Soldier butterflies even more than Monarchs.

The Viceroy and Monarch butterflies are distantly related through the family Nymphalidae. Viceroys and Monarchs exhibit Mullerian mimicry. Mullerian mimics represent two species that are both toxic to predators and have evolved to resemble each other to contribute to each other’s protection. This type of mimicry contrasts Batesian mimicry, in which a nontoxic species evolves to imitate a toxic species. A 2006 study* showed that the Viceroy’s genus Limenitis was originally black and white and evolved mimetic characteristics later. This finding opens the possibility that this species evolved color to mimic the Monarch before it evolved the chemical defense, so it may have started out as a Batesian mimic and then become a Mullerian mimic.

The salicylic acid from their host plant is what makes the adults taste bitter to predators.

Viceroys produce two or three broods a year, but reproduce continuously in southern Florida. Eggs are pale green or yellow and laid singly at the tip of the leaf. The larvae hatch five days later, and are most active at night when they feed. The caterpillar eats part of the leaf, but leaves the central vein as a perch. The instar, or second phase of the caterpillar, develops a spot on its back resembling a saddle. Protrusions in the thoracic segment grow continuously larger as the caterpillar ages. The fourth instar exhibits a white blotch resembling a bird dropping that assists with camouflage. The caterpillars can be white, brown, black, olive green or a mixture of all. In the pupa stage, they develop a large brownish bump on their abdomen.

Viceroys are found throughout the United States east of the Sierra Nevada and Cascade mountain ranges and south to Florida and Central Mexico.

They prefer wet habitat such as ponds, rivers and swamps because that is where their host plants can be found.