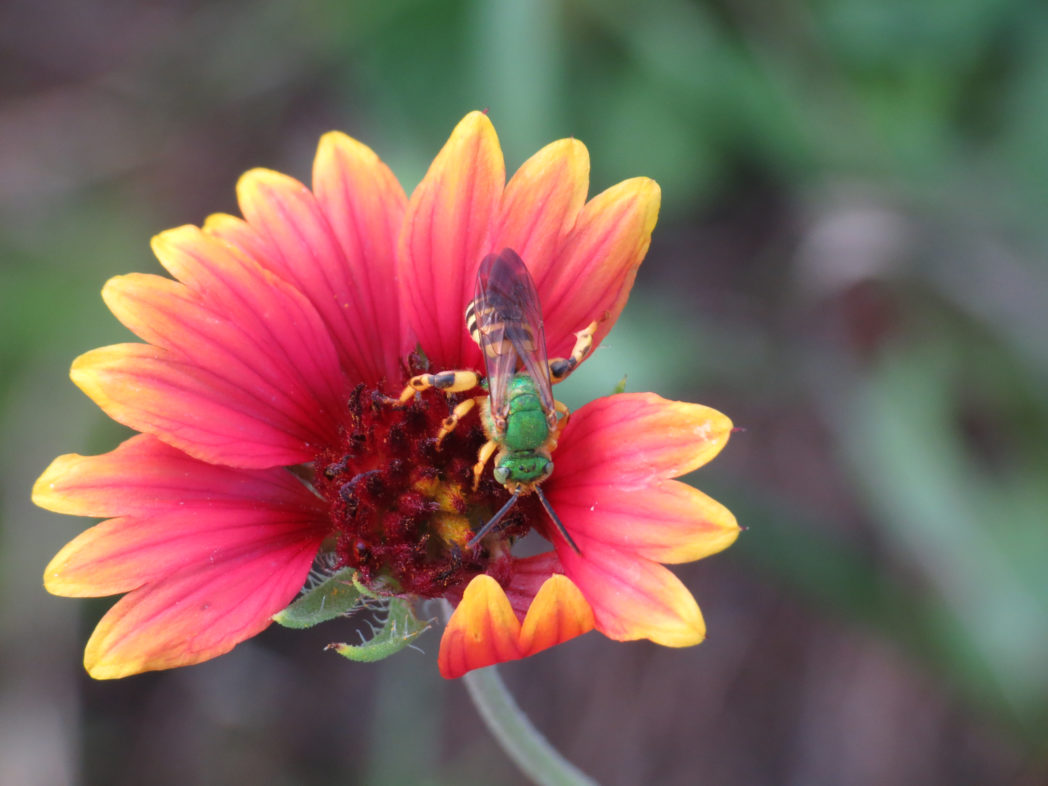 “Know your native pollinators” is a series of articles that will help you identify and appreciate Florida’s varied pollinators, including bees, wasps, butterflies, moths, beetles, flies, birds and bats. Pictured above: Agapostemon sp. on Blanketflower (Gaillardia pulchella). Photo by Jonnie Dietz.

Sweat bees are an extremely diverse group that are often abundant year round. Some are metallic green, others are smaller than a grain of rice, and nearly all are valuable pollinators.

The Asteraceae (daisy or aster) and Lamiaceae (mint) families are among the sweat bees’ favorite flowers. You’ll commonly see them foraging on:

On a hot summer day, sweat bees will seek out overheated humans to lap up their sweat. It’s believed the bees value sweat as a resource for salts and proteins, which they save for their developing young.

With well over 3,500 known species, Halictidae (also called Sweat bees, Metallic green bees, or Halictids) are found on every continent and thrive in nearly every habitat.

Sweat bees vary greatly in appearance, ranging from very small to medium in size. The majority of sweat bees are brown or black in color, but a handful are a beautiful metallic green, blue or even purple. This large group includes both extremely picky foragers (specialists) and vast generalists. Most female Halictids carry pollen on their hind legs (tibia and femur).

Nearly all species nest in the ground, but they exhibit varying levels of social behavior. In fact, Halictids display some of the most diverse nesting behaviors of any bee group including solitary, communal, semi-social and primitively eusocial nesters. What’s more is that many of these communal nesting behaviors are often dependent upon factors such as time of year, altitude, geographic location, climate and floral resources.

Florida is home to over 60 species of sweat bees. Most are ground nesters, and many are active year round. Sweat bees are important pollinators of our wildflowers and crop plants, some of which include stone fruits, sunflowers and alfalfa. A gardener can easily attract these bees to their yard by planting wildflowers and leaving untilled soil exposed for nesting sites.

Below is a description of some of the most commonly spotted genera in Florida.

Some sweat bees form primitive “colonies” with one bee taking on the role of queen. But unlike honey bees, all sweat bees retain the ability to lay eggs.

The metallic green bees are easily spotted with their flashy green colors, and are relatively abundant in urbanized areas. Some species are entirely metallic in color, while others sport attractive brown and white stripes on their abdomen. These bees belong to four different genera within the Halictidae family (Agapostemon, Augochlora, Augochlorella, and Augochloropsis), and are active almost year round if it remains warm enough.

Genus: Agapostemon
Most Agapostemon (pictured above on Blanketflower) are solitary ground nesters, but will occasionally nest in close proximity to one another. Agapostemon splendens is a common Florida species. Females are entirely iridescent green, but males typically have yellow and black stripes on their legs and abdomen.

Genus: Augochlora
Augochlora (pictured above) are an exception to the rule when it comes to Halictidae nesting behaviors. These bees prefer to nest in wood, often utilizing premade insect burrows and adapting them to fit their needs. These solitary nesters can have multiple generations per year.

Genus: Augochlorella
These bees nest in the ground and are primitively eusocial (meaning overlapping generations work together and divvy up tasks within their nest). One female will construct a cluster of nest cells and stock each cell with pollen and nectar for her developing young. When this first generation of daughters reaches adulthood, they take over the duty of collecting food and caring for the young, while the colony’s founder continues to lay eggs. Three generations later, the last group of daughters will overwinter until spring and become foundresses of their own colonies.

Genus: Augochloropsis
These bees are also ground nesters, and though they may share a nest entrance, their communal behavior stops there. Once underground each female will dig her own tunnels and provide for her own young.

Genus: Halictus
There are very few Halictus species in Florida, but what we lack in diversity we make up for in Halictus poeyi (pictured above). This small, brown bee is by far one of the most common sweat bees statewide, and they’re active almost year round.

Like Augochlorella, these bees are also a primitively eusocial. One foundress will establish a small cluster of nest cells and take on the role of queen.

This Lasioglossum is holding onto an insect pin, putting the bee’s small size in perspective. Photo courtesy of USGS Native Bee Inventory and Monitoring Laboratory.

Genus: Lasioglossum
Lasioglossum is a diverse group, with more than 40 species in Florida. Some are extremely tiny (smaller than a grain of rice!), and are often looked over or misidentified due to their size. Despite their small stature, these little bees are extremely abundant and considered important pollinators.

With so many species, it’s tough to make broad generalizations about this genus. Lasioglossum includes solitary, communal, social and primitively eusocial nesters. Most are brown or black in color, but a few species are metallic green. Like most other sweat bees, Lasioglossum tend to be active year round.

The genus Lasioglossum is one of the largest bee genera in the world, with over 1800 known species.