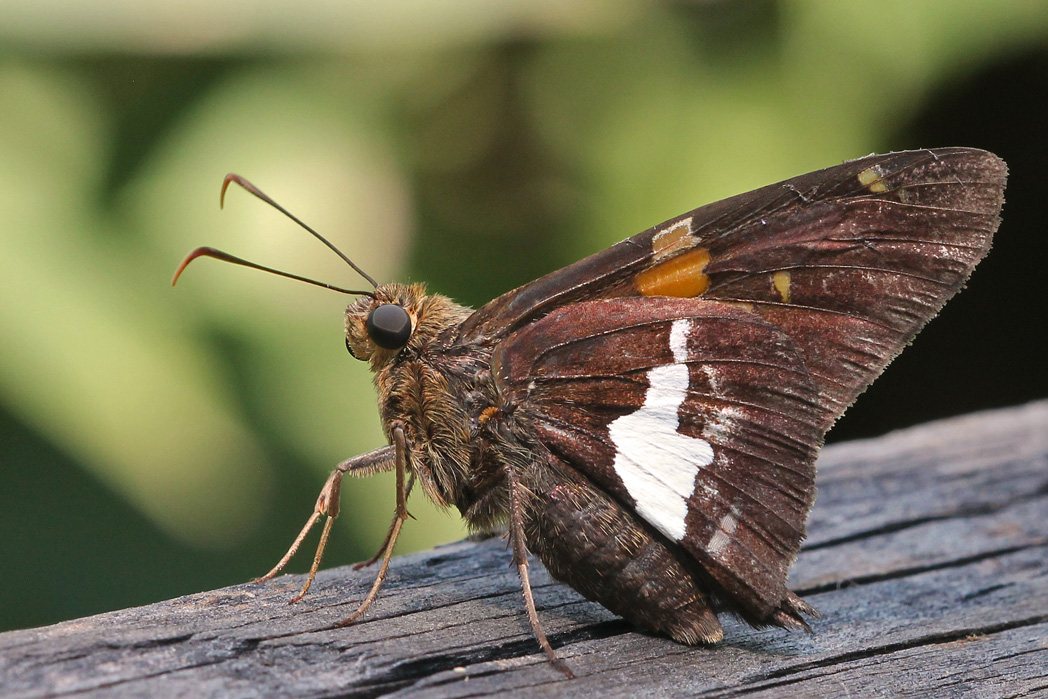 “Know your native pollinators” is a series of articles that will help you identify and appreciate Florida’s varied pollinators, including bees, wasps, butterflies, moths, beetles, flies, birds and bats. Pictured above: Silver-spotted skipper by Mary Keim.

You might find one of these creatures hanging upside-down, but it’s not a bat (or a vampire). It’s a Silver-spotted skipper!

Adults perch upside-down under leaves at night and on hot or cloudy days. Males perch on branches and tall weeds when they are seeking females. Sometimes they will go on flights to patrol for females.

The Silver-spotted skipper is one of the largest, most widespread and recognizable skippers. It has a quick jerky flight that is typical of skippers. Its wings are 1 3/4 – 2 5/8 inches long and brown to almost black with a dashed white wing fringe. The forewing has transparent gold spots visible on both sides. The hindwing of the butterfly is lobed and the underside has a metallic silver band which often looks like a large white spot, hence its common name. The antennae on this butterfly are slightly curved at the tip.

The caterpillar creates a leaf nest that will protect it from most predators, but the Polistes wasps learn to recognize the skipper’s shelter in order to find the larvae.

Silver-spotted skippers are common and can be found from northern Mexico to southern Canada, as well as most of the continental United States. In the West, they are absent from the Great Basin and West Texas, restricting themselves to more mountainous areas. You can find Silver-spotted skippers throughout Florida. The species is secure globally, but may be rare in some parts of its range.

The caterpillars regurgitate a greenish, bitter-tasting defensive chemical to ward off predators. That would make almost anyone lose their appetite for a Silver-spotted skipper!

In the South, the Silver-spotted skipper produces three to four broods from February until December. Two broods are common from May until September in most of the East, and only one brood is produced in the North and West. Woody, and sometimes herbaceous, legumes are the popular host for the larvae of these butterflies. Females lay single eggs that are green with a red top.

Caterpillars are two inches in length. They have a yellow abdomen with darker transverse stripes and spots. The head of the caterpillar is a dark reddish brown with large yellow eye patches. Prolegs are bright orange. During development, larvae create a shelter out of a folded leaf. They will leave shelters only to feed or make larger shelters. Older caterpillars string leaves together with silk thread to create their leaf nests. This leaf shelter also acts as protection for the pupa. The overwintering pupa stage is dark brown with black and white markings.

The Silver-spotted skipper larva is vulnerable to the Baculovirus infection. This virus is used as a biopesticide in agriculture.