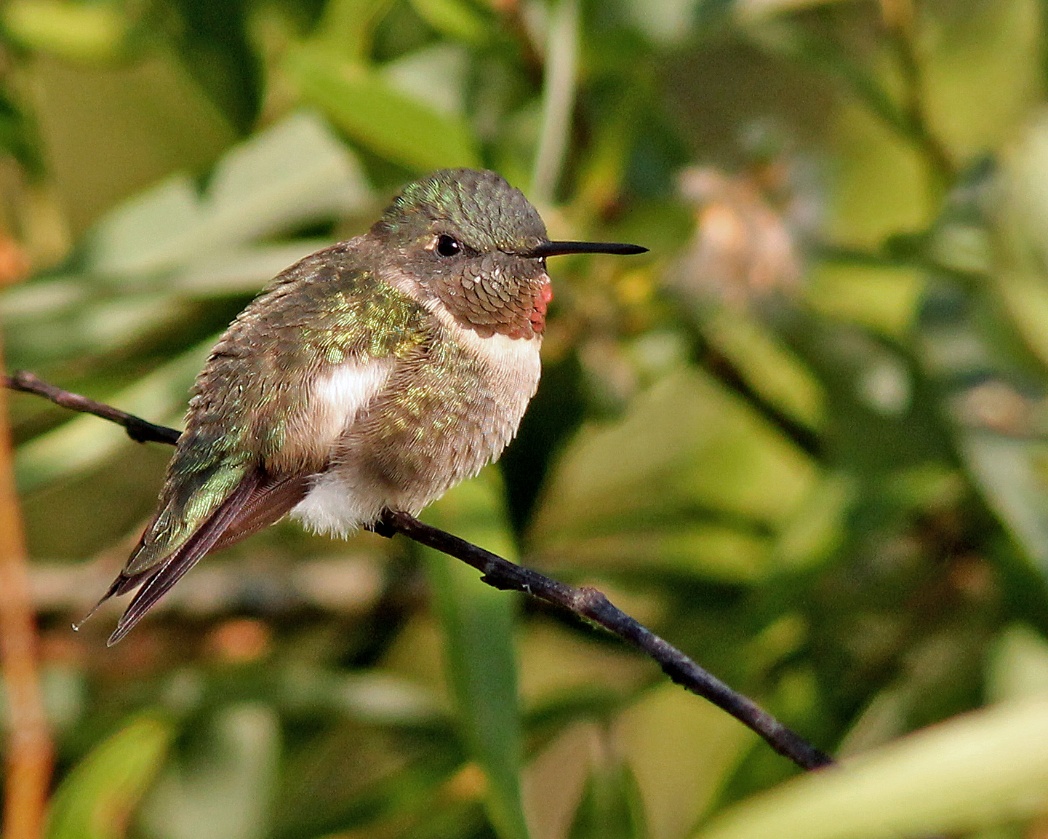 “Know your native pollinators” is a series of articles that will help you identify and appreciate Florida’s varied pollinators, including bees, wasps, butterflies, moths, beetles, flies, birds and bats. Pictured: Ruby-throated hummingbird by Mary Keim.

Ruby-throated hummingbirds prefer tube-shaped flowers to nectar from. These flowers are adapted to have nectar deep inside the flower, so pollen has the opportunity to stick on the head or back of the bird. These hummingbirds are especially attracted to red or orange blossoms standing at two feet or more above the ground. Favorite blooms of this hummingbird include Coral honeysuckle (Lonicera sempervirens), Red buckeye (Aesculus pavia), Coralbean (Erythrina herbacea), Firebush (Hamelia patens) and Trumpet creeper (Campsis radicans).

This hummingbird has a high metabolism, and may eat twice its body weight in a day to fuel its energetic movements. It often will pluck insects from spider webs or grab them in flight.

Ruby-throated hummingbirds are the most commonly found hummingbirds in Florida. As their name suggests, the male’s throat displays a ruby red color in full lighting. When not viewed in direct light, the throat will appear dark. Adult males and females have a metallic green back and crown and a grayish-white underside. The male has a more pronounced forked tail than the female. Both have a slender, long bill that curves slightly downward.

The hummingbirds are 7–9 cm long with a wingspan of 8–11 cm. They weigh only 0.1– 0.2 ounces, about the weight of a penny. They are fast flyers and can stop instantly, hover, and adjust position up, down, backwards and even upside down. Their flight is very controlled, and their fairly short wings beat 53 times per second. At a close distance, the hum of their beating wings can be heard.

These hummingbirds are not very vocal, but can communicate with high-pitched, sharp chatter and “pips” for courtship or when they feel threatened.

The legs of the Ruby-throated hummingbird are too short to function effectively for walking and hopping.

Ruby-throated hummingbird habitat includes open woodlands, meadows, forest edges, grasslands, parks, gardens and backyards. They are found in Florida from March to October, although some remain year-round in South Florida. Migrating males arrive first in the spring and are the first to leave for Mexico or South America in the fall. Females will follow two weeks later.

Some hummingbirds will double their body weight and fly nonstop across the Gulf of Mexico during their migration.

Male hummingbirds court females who enter their territory by flying in arcs, diving and showing off their plumage. Females lay one to three eggs at a time and may have several broods in a year. The incubation period lasts two weeks. Mom feeds the babies for three weeks until they leave the nest. Aside from the breeding season, these birds are relatively solitary. Not all birds of a feather “stick together.”