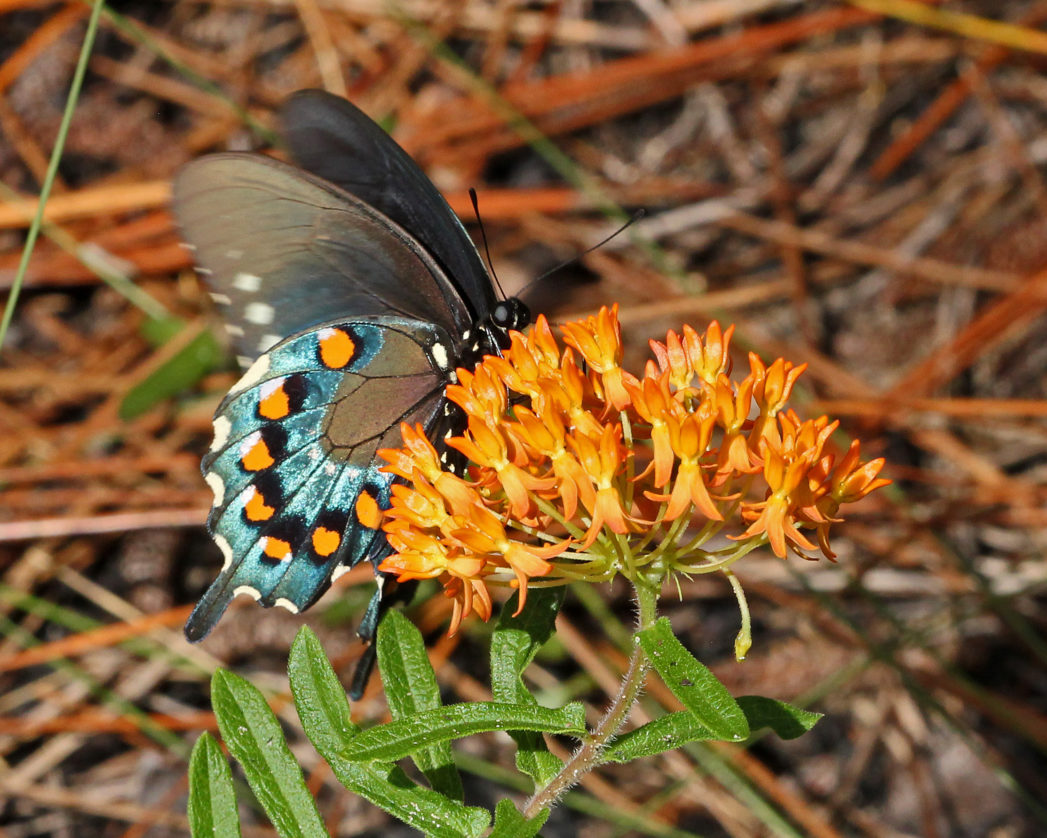 The non-native Elegant Dutchman’s pipe (A. elegans), also known as calico flower, is dangerous to Pipevine swallowtail larvae. While the plant is attractive, it is distasteful to the larvae who will die of starvation rather than eat it. Plants in the native Florida genus Smilax can also be a threat to these butterflies. The leaves have a similar shape to pipevines, and female butterflies can confuse the two when laying their eggs. Caterpillars on Smilax plants will not survive.

Pipevine plants contain aristolochic acid. Larvae safely consume this toxin, rendering them unpalatable to some predatory birds and wasps. This toxicity will stay in the Pipevine swallowtail’s system through adulthood. The butterflies’ resilient bodies are often intact when spit out by a bird. Other butterflies, trying to look distasteful to predators, mimic the Pipevine swallowtail. These imitators include the Spicebush swallowtail and the Eastern black swallowtail.

This butterfly’s favorite colors for nectar flowers are pink and purple.

These charming butterflies are mostly black with iridescent blue on their dorsal hindwing that is more prominent among males. Also on the hindwing is a row of white dots along its edge. When the wings are closed, the hindwing displays seven orange spots surrounded by blue and highlighted with white markings.

The Pipevine swallowtail’s wingspan is 7–13cm. In addition to the coloration, this butterfly can be distinguished by its slow erratic and flight.

The genus Battus derives from Battus I, the founder of the Greek colony Cyrenaica in Africa. The species epithet comes from the Greek word “philandros” meaning conjugal, or fond of husband.

The Pipevine swallowtail spans from southern Connecticut to Central Florida, west to Arizona and south into Mexico. There is an isolated population in California. They also have been found in Southwestern Ontario, out of their native range, likely because their host plants, specifically Aristolochia macrophylla, are planted as ornamentals.

Males sometimes use sodium found in mud as a courtship gift. Who doesn’t like salty snacks?

Eggs are reddish-orange. They may be laid singly or in a limited amount on small vines and sizeable clusters on larger vines. The amount laid is in proportion to the vine size. Young larvae have short orange tubercles that will grow longer and have a glossy look. The mature larva can be solid black with two rows of yellow dots or bright red with spiny growths all over. They are covered in tiny hairs, giving their appearance a velvety texture. Young caterpillars are gregarious, but get more solitary as they grow older.

The pupa is light brown or green with darker veins. The chrysalis looks much like a dead leaf to the untrained eye — and hopefully to unsuspecting predators as well. The pupa stage lasts 10–20 days. Upon emerging, adults will live from 6 to 14 days. They can be found in flight during spring and summer.

Pipevine swallowtail larvae are prudent with available nutrients! The first meal the larvae eat is chorion, which is their eggshells. They will also eat the remains of their exoskeleton after molting.