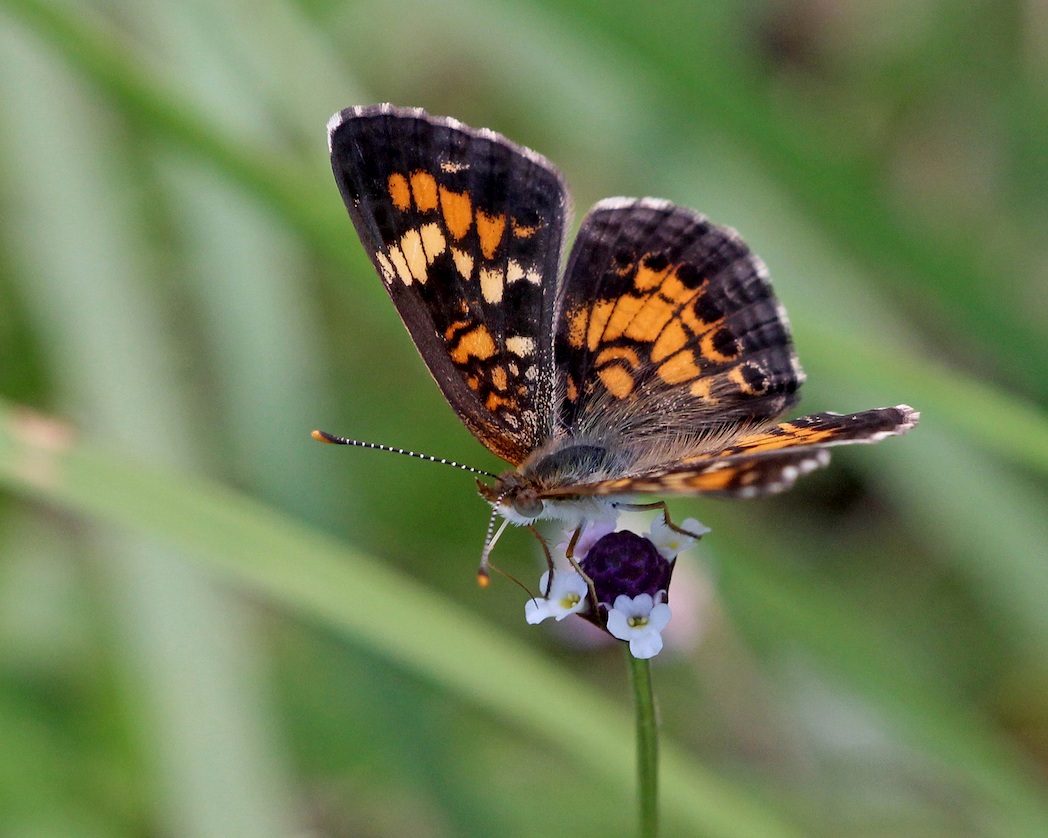 “Know your native pollinators” is a series of articles that will help you identify and appreciate Florida’s varied pollinators, including bees, wasps, butterflies, moths, beetles, flies, birds and bats. Pictured above: Phaon crescent on Turkey tangle frogfruit (Phyla nodiflora) by Mary Keim.

The name Phaon crescent reflects the loveliness of this butterfly. In Greek mythology, Phaon was an old and unattractive boatman. According to myth, he ferried Aphrodite a long distance, but would not accept payment. As a gift, Aphrodite gave him back his youth and made him beautiful — almost as beautiful as the Phaon crescent, itself!

The genus name Phyciodes may derive from the Greek word phykos, literally translating to “seaweed” and likely referring to the dye of algae plants the ancient Greeks used as cosmetics. The Phaon crescent may look painted with make-up, but, of course, its beautiful features come naturally.

Frogfruit is the host plant of the Phaon crescent larvae. Frogfruit is a small flowering groundcover that can be a great alternative to turf grass.  This includes Lanceleaf frogfruit (Phyla lanceolata), found in a few Panhandle counties; Southern frogfruit (Lippia stoechadifolia), a state-endangered species found in Miami-Dade, Broward and Collier counties; and Turkey tangle frogfruit (Phyla nodiflora), which is found throughout Florida. The Phaon crescent nectars on plants in the Verbena (Verbenaceae) family, frequently on the same host plants used by the larvae. Adult butterflies also enjoy Beggarticks (Bidens alba).

This butterfly has a dark orange and brown checkered forewing with a band of pale cream in the middle that can also be found on the underside. The underside is similar to but paler than the upper wing with orange, light tan and dark brown markings. This butterfly’s wingspan is 1–1½ inches wide.

There are 18 species of crescents in North and South America. Although frequently confused with Pearl crescents, Phaon crescents have a smaller and brighter cream-colored band on their forewing. The wings of the Phaon crescent are also more checkered than those of Pearls.

Phaon crescents prefer moist open areas such as dunes, road edges, pastures and openings in dense forest thickets. They generally are found only in the southern United States since frogfruits, their host plants, cannot withstand freezing temperatures. Their range extends from Guatemala up through southern California, and stretches east to South Carolina and down to Florida and Cuba. Occasionally, some can be found in the Midwest, but they are not common.

New Mexico will see these butterflies in flight from April to September. They fly in California from February until October. In peninsular Florida, they can be found Florida almost year round.

Young caterpillars eat together in groups and become more solitary as they grow older.