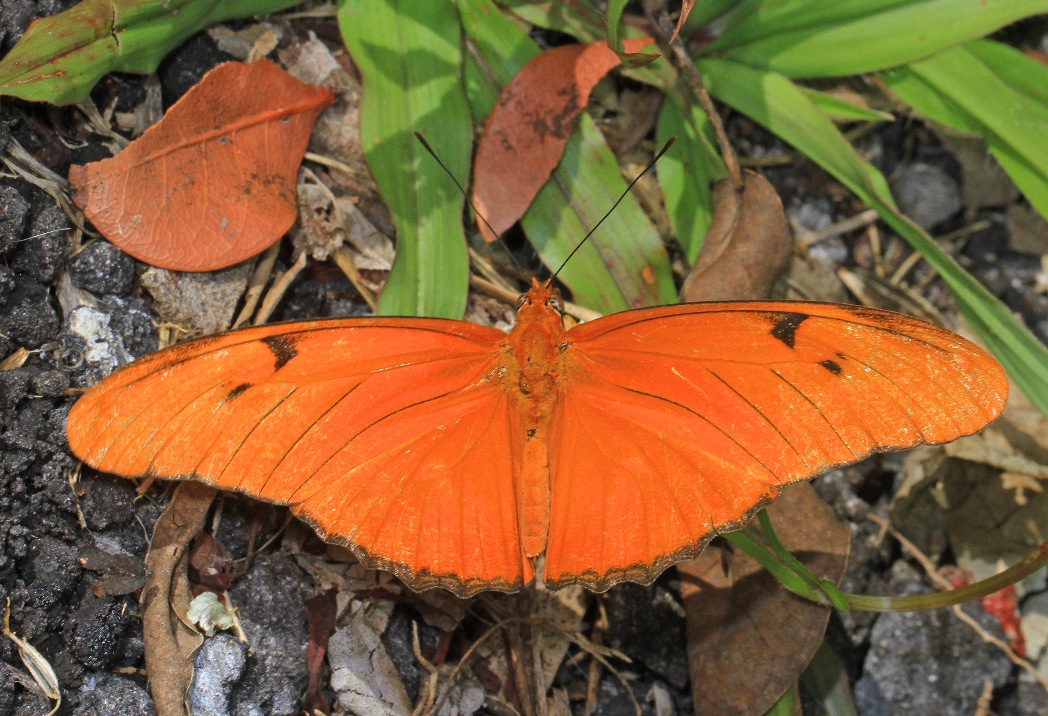 “Know your native pollinators” is a series of articles that will help you identify and appreciate Florida’s varied pollinators, including bees, wasps, butterflies, moths, beetles, flies, birds and bats. Pictured above: Julia (Dryas julia), Everglades National Park, by Judy Gallagher (CC BY 2.0).

The genus name Dryas originates from Greek Dryad nymphs that live in oak forests. What an appropriate name for this forest-dwelling butterfly!

Also known as Julia heliconian and Flambeau (the flame), the Julia butterfly is one of three in the Heliconinae subfamily and is a member of the Heliconini tribe. These Heliconini are also known as longwings and include Florida’s state butterfly, the Zebra longwing. They belong to the Nymphalidae or brush-footed family of butterflies. The Julia’s legs are covered in short bristles that look like they could belong on a hairbrush.

Julias are recognizable by their elongated orange wings, which can stretch to a 9.2 cm wingspan. Females are generally a duller orange than their male counterparts and have a black bar across the forewing, close to the tip of the wing. Males have this black marking, but it is more spotted than bar-like. Both sexes have a narrow black border on the hindwing. The Julia’s front legs are so short they usually cannot be seen, giving the appearance of having only 4 legs.

Julias practice Batesian mimicry, mimicry of a harmless species imitating a harmful one, and have evolved to resemble orange butterflies like the Monarch that are actually toxic to predators.

Julias are common throughout the southeastern United States and are found in flight year-round in southern Florida. Stretching farther south, they can be found in tropical regions of Central American, the Caribbean and South America.

If you are observant, you can probably find Julias flitting through oak and hardwood hammocks, meadows and other clearings, riverbanks and hopefully even your own wildflower garden!

In South America, Julias are known to sit on the heads of Caimans (relatives of our alligators) and drink their tears!

The female lays a yellow egg singly on the host plant. The eggs become a mottled brown over time. Larvae are brown with white spots and black branched spines all over their bodies.