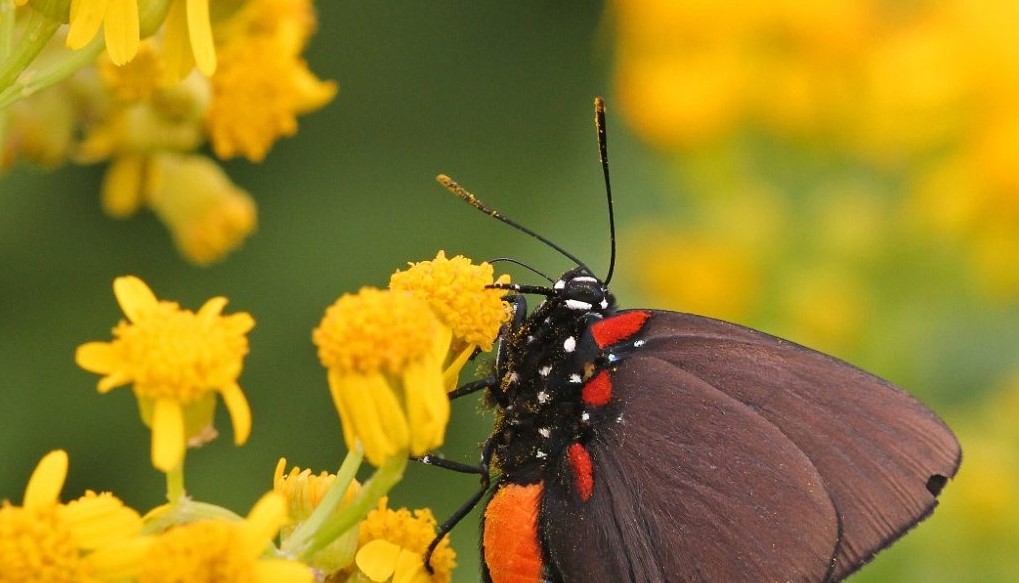 “Know your native pollinators” is a series of articles that will help you identify and appreciate Florida’s varied pollinators, including bees, wasps, butterflies, moths, beetles, flies, birds and bats. Pictured above: Great purple hairstreak (Atlides halesus) on Butterweed (Packera glabella) by Mary Keim.

Mistletoe might be a fun holiday tradition for us, but it is a necessity for this butterfly.

Despite its appellative, the Great purple hairstreak is not true purple in color. It can have a purplish-brown sheen to the undersides of its wings, but the dorsal side is a shimmer of iridescent blue. (Some publications even refer to it as the Great blue hairstreak.) This blue iridescence is not as strong in females as males. The blue is framed by black along the wing edges.

Purple hue notwithstanding, the undersides of the wings are mostly a brownish-black, with three bright orange or red spots. Two of these spots are found on the hindwing. The hindwings each bear two tails, one longer than the other, and both displaying blue spots and green lines. Males have an iridescent blue streak on the underside of their front wings and a scent scale on the upper side of their forewings that produces pheromones. The underside of the abdomen is orange.

The wingspan of the Great purple hairstreak is relatively large, reaching 1.25 − 1.9 inches.

It has only one Florida native host plant: Oak mistletoe (Phoradendron leucarpum). This parasitic plant can be found in Central and North Florida and is pollinated by wasps and bees.

Great purple hairstreak butterflies are found in the southern United States, from southern Oregon east to Maryland. Adults can be found year-round in Florida in oak hammocks, agricultural land, yards and anywhere with Oak mistletoe nearby. Outside of the U.S., they occur in Central America as far south as Guatemala.

Eggs are flattened and white with a textured surface. At maturity, larvae are 2.5 cm long with dense, short, orange hairs covering their green bodies. They pupate under loose bark or leaf litter close to the base of the tree where they hatched. Parasitoid wasps frequently will attack pupae.

As a defense, adults tend to land with their heads down. If a predator grabs their back wings, the wings can tear and the butterfly can fly away.