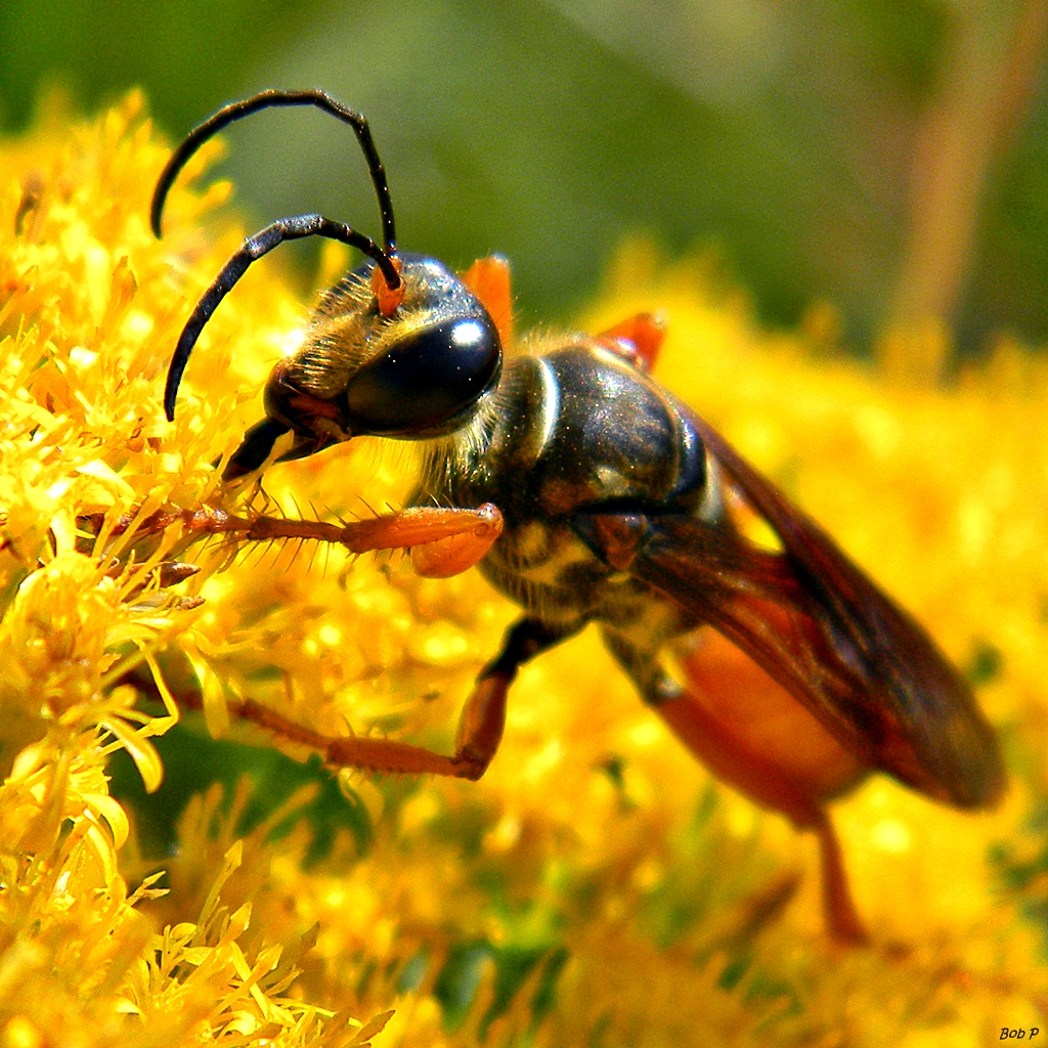 “Know your native pollinators” is a series of articles that will help you identify and appreciate Florida’s varied pollinators, including bees, wasps, butterflies, moths, beetles, flies, birds and bats. Pictured above: Great Golden Digger Wasp (Sphex ichneumoneus) by Bob Peterson.

Wasps can be crucial pollinators too, and this gentle digger wasp is one you’ll want to meet in your garden.

Like other members of the Sphecidae or thread-waisted wasp family, Great golden digger wasps have an especially thin segment connecting their thorax and abdomen. They are 1/2 to 1 inch in length, sometimes longer. Short, golden hair covers their black head and thorax. The rear segment of the abdomen is black, and the front abdomen and legs are reddish-orange. Great golden digger wasps are solitary, so you will not likely see more than one of them at a time. And although they display bright colors as if to warn predators off, these wasps do not exhibit aggressive behavior. With no colony to defend, they would rather just retreat from a threat. Females possess a limited amount of venom that is used to paralyze small insects for larval nourishment. Males do not even have stingers.

The Great golden digger wasp is a beneficial insect, but not just because it provides pollination services. It will also aerate the soil and eliminate some uninvited pests from your yard!

Great golden digger wasps usually appear during the summer to drink nectar from flowers. They have been observed on Spotted beebalm (Monarda punctata), Tall elephantsfoot (Elephantopus elatus) and Goldenrod (Solidago spp.). These wasps are wary, and do not linger among flower blooms. You must be vigilant to spot one.

Found in Canada, the United States, Mexico, the Caribbean, and Central and South America, it is attracted to sunny meadows and areas of sandy soil to build its nests.

The species epithet ichneumoneus originates from the Greek ichneumon, meaning “tracker”, an appropriate name since the Great golden digger wasp tracks its prey.

The female wasp will dig tunnels into loose soil to prepare its nests. She can dig about six nests with three to 10 tunnels in each, making sure to cover the entrance with dirt when she leaves. The female wasp then hunts for small insects in the Tettigoniidae or long-horned grasshopper family. When she finds her prey, she will paralyze it with her stinger and then hold the insect between her mandible (mouth appendage) and her antennae to carry it back to the nest. Birds will often swoop at her, hoping she will drop the easy prey.

The Great golden digger wasp is the only thread-waisted wasp known to be chased by birds during this process. If the female wasp makes it back to the nest with her prey, she will first inspect the tunnel to make sure it is still intact, then put the insect head-first in one of the tunnels and lay an egg on its abdomen. Covering the tunnel up with dirt, she repeats the process for all tunnels. Unlike some other wasps, the Great golden digger does not defend its nest. The mother wasp leaves the nest tunnels and does not return. Upon hatching, the wasp larva will have an insect to munch on.

Studies examining this female wasp’s behavior when burying prey in the tunnels show the process to be extremely automatic. When scientists moved the prey a short distance away, the wasp would restart tunnel examination as soon as she found the prey again. Another study concluded that if the grasshopper prey was missing antennae, the wasp would not pull the grasshopper into the tunnel, despite the likely effectiveness of using a leg or other appendage. The wasp seemed to be programmed to only pull by antennae.