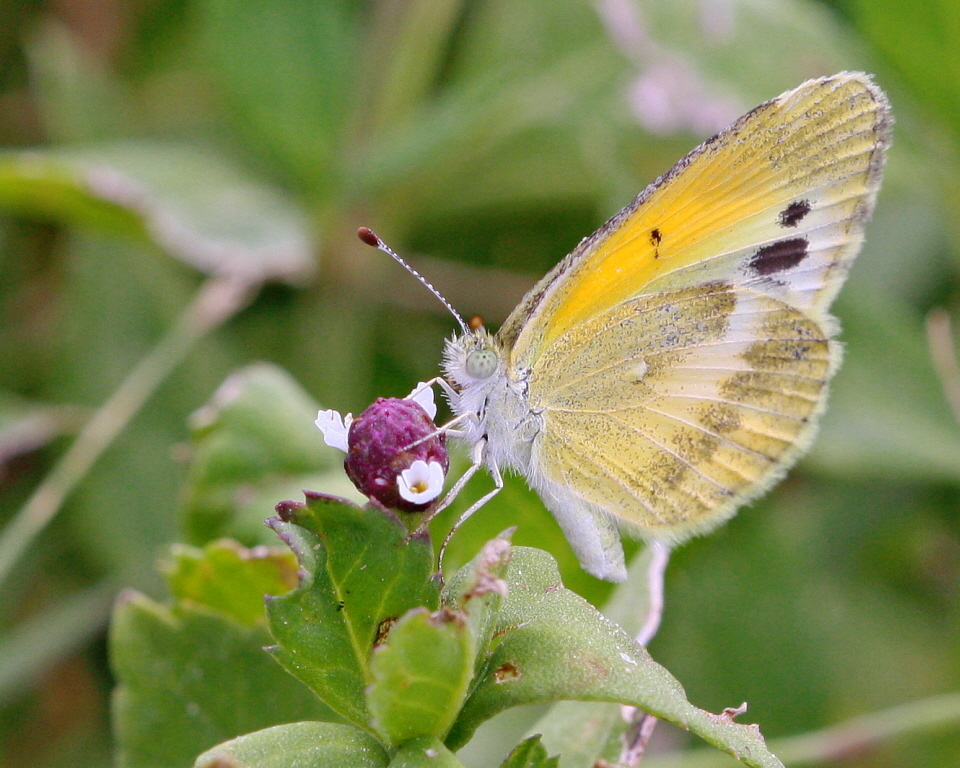 “Know your native pollinators” is a series of articles that will help you identify and appreciate Florida’s varied pollinators, including bees, wasps, butterflies, moths, beetles, flies, birds and bats. Pictured above: Dainty sulphur (Nathalis iole) on Frogfruit (Phyla nodiflora) by Mary Keim.

These Dainty sulphurs are aptly named, as they are the tiniest sulphur butterflies in North America.

Also known by the common name Dwarf yellow, the Dainty sulphur butterfly has a wingspan that measures only 2 – 3.2 cm. Although smaller in general, their wings are more elongated compared to other sulphurs (subfamily Coliadinae). Dainty sulphurs are yellow with black markings that are especially prevalent in females. The underside of the sulphur’s forewing has an orange patch at its base, and there are two black spots at the outer wing edge. Winter sulphurs have a dusty green hindwing, while the hindwing of the summer sulphurs is pale yellow. Adults rest with their wings closed and facing the sun to get the full effect of its warm rays.

The Dainty sulphur can also be seen as a rare white form.

The Dainty sulphur is the only North American sulphur caterpillar that eats asters.

These butterflies can be found in flight throughout the year in peninsular Florida. Some overwinter here and migrate north in spring and summer. Outside of Florida, they are also found in Guatemala and the Southwest United States throughout the year. These butterflies cannot survive cold winters, but re-colonize northern states like Southeast Washington, Idaho and Minnesota in the summer.

Dainty sulphurs are found in open and dry places such as roadsides, weedy fields, grasslands, meadows and coastal flats.

Males fly a few inches above the ground looking for females. Females lay yellow eggs singly on the leaves of host plant seedlings. The mature larva is green, often with a narrow purple dorsal and lateral stripe, although this can vary. The chrysalis is small and green with a rounded head.