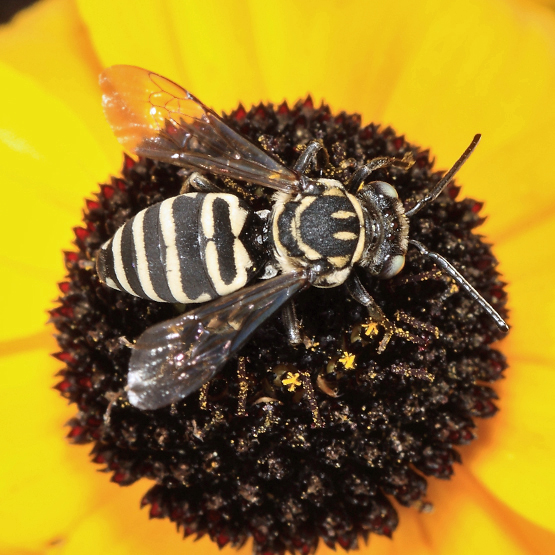 “Know your native pollinators” is a series of articles that will help you identify and appreciate Florida’s varied pollinators, including bees, wasps, butterflies, moths, beetles, flies, birds and bats. Pictured above: Triepeolus sp. by Tom Murray.

Cuckoo bees are often mistaken for wasps because their body shape resembles a wasp, and they are nearly hairless. They also lack the pollen baskets that most bees have on their legs because they do not collect pollen for their young.

Cuckoo bees are generalists, so they may visit a number of flowering species, but they are especially fond of Spanish needles (Bidens spp.), frogfruit (Phyla nodiflora), Florida sunflowers (Helianthus spp.) and dotted horsemint (Monarda punctata). They do not collect pollen. They visit flowers solely to collect nectar.

Cuckoo bees are cleptoparasitic, meaning the females lay their eggs in nests of other bee species (i.e. host nests). To find a nest, the female cuckoo will hover near the ground to identify a particular odor emitted from a nest. Once she finds one, she will wait for the host to leave, then enter and lay eggs. When her young hatch, they kill the host’s larva and feed on pollen collected by the host. They remain in the nest until mature. The bee gets its name from the cuckoo bird, which also will leave its egg in a host’s nest for the host to raise.

Like carpenter bees (introduced in the first article in this series), cuckoo bees are also in the Apidae family, but make up the subfamily Nomadinae. In Florida, there are three main genera of Nomadinae: Nomada in the Nomadini tribe, and Epeolus and Triepeolus in the Epeolini tribe. These three genera represent 42 species. Also in the Epeolini tribe is the genus Doeringiella, which includes three species endemic to Florida: D. alachuensis, D. rugosus and D. rufuthoax.

Nomada spp.
Although it may be difficult to identify different species, most of the members of the Nomada genus are wasp-like and moderate in size (0.1-0.6 inches long). They are red or black and show yellow or red integument coloring. Their antennae may look thicker than other bees and they have no pollen-carrying structures. Most Nomada species prefer the nests of Andrena (mining bee) species for parasitizing. They will often lay up to four eggs in a single nest.

Nomada comes from the Latin for “nomad,” referring to the way these bees seemingly wander in search of host nests.

Epeolus spp.
Bees in the Epeolus genus typically have chunky thoraxes and black-and-white-striped abdomens with close-cropped hair. Some also have red marks on their abdomens. They range in size from 0.2 to 0.6 inches. All Epeolus species parasitize Collettes (polyester bee) species. Female Epeolus bees have spines on their abdomens with which to pierce the cellophane-like lining put up by Collettes to protect their eggs from moisture and soil bacteria. The Epeolus then lays its egg between two layers of lining.

Triepeolus spp.
Triepeolus bees also don contrasting black and whitish-yellow stripes, but their thoraxes bear two white dots and a curved whitish stripe against a black background, giving the appearance of a happy face on their backs (see photo above). They sometimes have red legs. Their size varies from .25 to more than 1 inch. Triepeolus bees will parasitize a number of species’ nests.

It is not uncommon to find a Triepeolus bee snoozing on a flower petal. They simply tuck their legs under their abdomens and relax their antennae straight out before falling fast asleep.