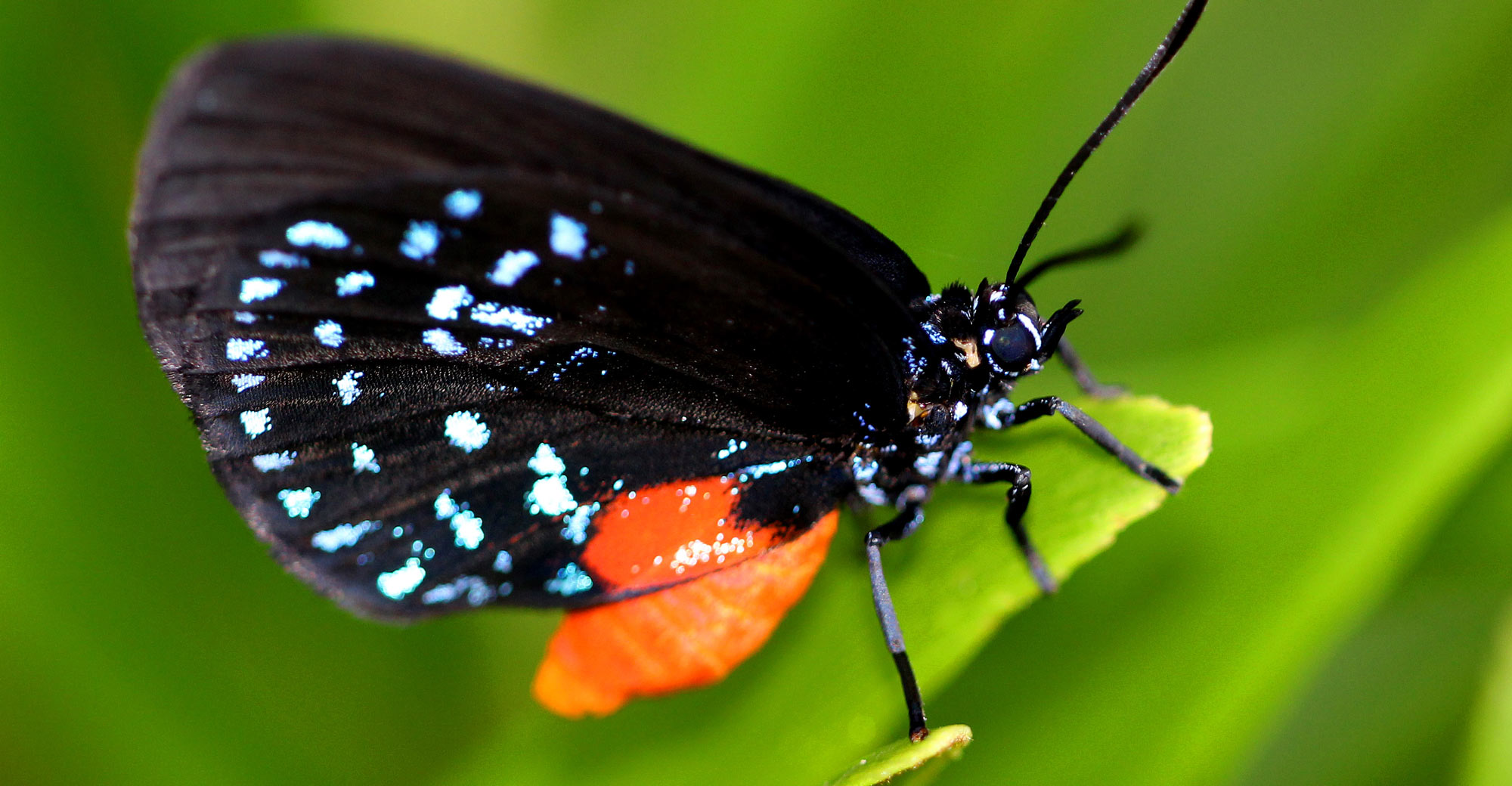 “Know your native pollinators” is a series of articles that will help you identify and appreciate Florida’s varied pollinators, including bees, wasps, butterflies, moths, beetles, flies, birds and bats. Pictured above: Atala butterfly (Eumaeus atala) by Mary Keim.

This rare butterfly, once thought to be extinct, is making a comeback thanks to the popularity of its host plant in Florida landscaping.

The Atala’s name is literary in origin. Eumaeus was a hero in the Trojan War and a friend of Odysseus in Homer’s the Illiad and The Odyssey. The species epithet atala comes from French author Chateaubriand’s tragic 19th century novella of the same name, which takes place amidst Native American tribes in the southeastern United States.

With a wingspan of 3.8 − 5.1 cm, the Atala is the largest hairstreak in Southeast Florida. It is also the most iridescent, with a velvety black surface and turquoise shimmer on the dorsal side of its wings. This coloring is striking in males and can be bright blue or greenish teal. Blue scales are more common in summer months, while the wings favor a greener shade in winter. The underside of the wings bears three curved rows of ultramarine spots and a large red spot on the hindwing. The abdomen is orangish-red, matching the butterfly’s hindwing spot. Males have a pheromone-emitting structure known as a “hair pencil” at the end of their abdomen. Female butterflies are larger than their male counterparts.

Atala butterflies are relatively sedentary. They have a slow flight pattern that is similar to the flight of moths. Males will fly erratically only when showing off. Males often perch on the top side of leaves, while females usually can be found hanging upside down underneath the leaves. Atalas are most active in early morning or late afternoon.

Coontie (Zamia integrifolia), North America’s only native cycad, is the host plant for the Atala butterfly. The two have a mutualistic relationship. The caterpillars eat the plant’s leaves and their abundant fecal droppings fertilize the surrounding soil. The leaves contain cycasin, a toxic chemical that the larva ingests and keeps in its body throughout its life cycle. This chemical is even found in their eggs.

The Atala uses aposematic coloration — bright warning colors — to alert predators that it is poisonous. Probably because of the security they have in their protective toxin, these butterflies are usually not frightened off easily. They do not have many natural predators.

Atalas naturally occur along Florida’s southeastern coast in subtropical counties of Palm Beach, Miami-Dade and Broward. Outside of the United States, the Atala is found in the Bahamas, Turks and Caicos, the Cayman Islands and Cuba.

In their range, you can find the Atala butterflies fluttering in shady hammocks and gardens where Coontie is abundant.

Although toxic, an edible starch (known as Florida arrowroot) can be made from the Coontie root with proper preparation. Early settlers overharvested the plant for this starch. The Atala butterfly disappeared along with Coontie and was thought to be extinct from 1937 until 1959 when scattered specimens were found. In 1979, the butterflies were discovered on a barrier island off the coast of Miami. The species is believed to have rebounded from this population. Oddly the Atala is not federally listed under the Endangered Species Act. Florida lists it as a “species of greatest conservation need.” Although rare, the Atala has rebounded considerably and has even moved beyond its historic range along the southeastern coast of Florida to localized areas near Florida’s west coast.

The Atala breeds year-round. Its cream-colored eggs are 1−1.25 mm in diameter and laid in clusters of more than 60. Newly hatched caterpillars are 0.5−1 mm and pale but become red with yellow spots within two days of hatching. The larvae molt (known as the instar phase) three to five times until they are fully grown at 2.5 cm.

On the tenth day of the last instar, the larvae look for a pupation site and will come together with other larvae. They release silk that connects to the other larvae and their host plant as an anchor from strong winds. Ten-day-old pupates produce sound known as stridulation, although it is inaudible to humans. This sound may coordinate emergence with other pupates.

Atala populations peak in June and January. Adults may live as long as two months in ideal settings with plentiful nectar resources. Because of their lengthy lifespan, these butterflies may mate intergenerationally, which promotes genetic diversity and species resilience.

Rather than being aggressive or solitary, female Atalas are friendly with each other. They will often lay eggs together on the same plant.