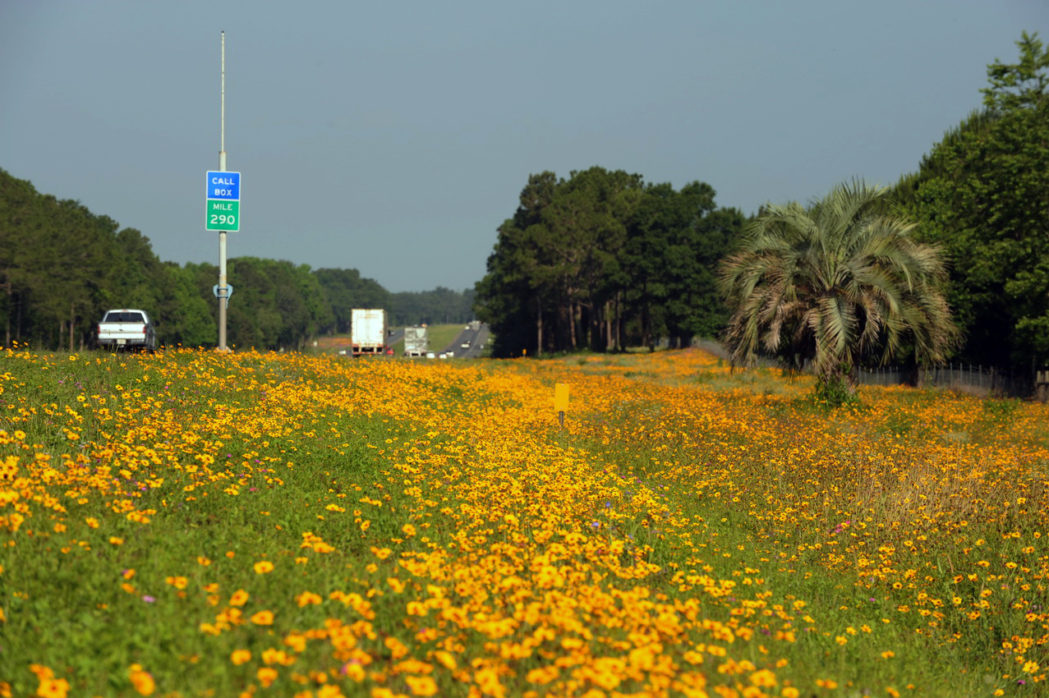 Goldenmane tickseed — native to Florida or Texas native naturalized in Florida?
by Jeff Norcini
I thank the Florida Wildflower Foundation for providing a forum to present my views about this issue. My views do not represent the official position of the Foundation.

Large, spectacular displays of goldenmane tickseed (Coreopsis basalis) adorn Florida roadsides in the spring, mainly in the north half of Florida. It is one of Florida’s most reliable wildflowers in terms of sustainability, showiness and stand density. In years of drought, they look good; in normal to rainy years, the stands are outstanding. This year has been awe-inspiring based on reports of colleagues as well as those who simply appreciate beauty.

When I started my native wildflower program while a faculty member at the UF/IFAS North Florida Research and Education Center in Quincy, one of the genera I focused on was Coreopsis because it was the state wildflower and the Florida Department of Transportation had a strong interest in using it on roadsides. I became very interested in C. basalis because of the impressive roadside and meadow displays I had seen in the Big Bend region.

In this article, I contend that C. basalis is native to Florida because there is insufficient scientific evidence to show beyond a reasonable doubt that it is non-native. In other words: Innocent until proven guilty.

Coreopsis basalis occurs mainly in the lower south from Texas to North Carolina. It is not considered native to Florida because it was not mentioned as occurring here by 19th century botanists. Botanists in the 20th century refer to it as being native to Texas and being only recently introduced, having escaped cultivation in the eastern part of its range. Native plant definitions reference European settlement, which in Florida’s case is 1513:

Florida Administrative Code Rule 5B-40.001 (11) Native plant. A plant species that is presumed to have been present in Florida before European contact.”

However, the Florida Native Plant Society further refines that definition:

A ‘Florida native plant‘ refers to a species occurring within the state boundaries prior to European contact, according to the best available scientific and historical documentation. Florida native plants include those species understood as indigenous, occurring in natural associations in habitats that existed prior to significant human impacts and alterations of the landscape.

The gap between 1513 and 19th century botanical exploration concerned me so that I sought a second opinion. I contacted Andy Clewell, first in the summer of 2002 (Clewell, 2002), and again this May (Clewell, 2013). Andy, who authored Guide to the Vascular Plants of the Florida Panhandle (University Press of Florida, 1988), was a botanist at FSU before becoming a restoration ecologist, both professions for which he is internationally recognized.

Richard Wunderlin considers it possible that C. basalis may have migrated into an extreme northwest county of Florida in the 1500s, maybe assisted by Native Americans; he was not certain whether prior to or after the 1530s. As well, Clewell (2002) commented:

…Was someone watching when the first population of Coreopsis basalis arrived in Florida? The timing of introduction is critical. The year 1492 is often used as the threshold year. Species that were previously introduced are considered to be native.  Plant collection did not begin in Florida for another 300 years and not in earnest for 400 years. That temporal gap is disconcerting when it comes to deciding if a species is native or not. Native Americans were known to move around numerous plant species in trade that reached from downstate to the Yucatan, using 40-foot dugout canoes that plied what is known now as the Inter-Coastal Waterway. Did they bring in Coreopsis basalis from elsewhere? If so, when? Does it matter when, since… indigenous people may have made the introduction? I think that at least 10%, and perhaps much more, of the alleged indigenous flora of Florida consists of Indian introductions, before or after 1492 and from as far away as Central America and the entire Carribean [sic]. And what is scientific about the date 1492? …Setting any date for what’s native is arbitrary… [and] essentially says that plants are not dynamic. It also… inserts political history into the evaluation of biological processes. (Clewell, 2013)

If not introduced by Native Americans, it’s possible the C. basalis was introduced into the Panhandle in a previous geologic era and that only small isolated pockets, which were disjunct (see box) from the parent population in Texas, were present at the time of European settlement. As Nancy Coile (2002) noted:

At the height of glaciation when the water level was 300 feet lower than present, the continental shelf was exposed to give a corridor across the northern part of the present Gulf of Mexico… This land exposure allowed easier migration of plant species from what is present day Texas…

Is Coreopsis basalis one of those species that moves around with the climate every millennium or two? If so, isn’t it rather harsh to call it an exotic? There are many species that move around, particularly tropical ferns whose spores are blown into Florida periodically by storms. Also the tiny seeds of orchids. They are not considered to be exotics. Why should Coreopsis basalis be called an exotic if it, too, moves around?

Being limited to small isolated pockets, C. basalis easily could have been unnoticed by botanical explorers. It would be presumptuous to assert that botanical explorers observed every species in every habitat at every time of year.

There are those who would point out that C. basalis can’t be native to Florida since it only occurs in disturbed habitats (areas associated with human activity like pastures, roadsides, fencerows, etc.) and not in any one of Florida’s natural ecosystems. While that may be true now, and even in the 19th century, that conclusion does not take into account the dynamics of plant populations as mentioned previously. In the Florida part of its range, C. basalis simply may be best adapted, or became best adapted, to a disturbed habitat. Plant adaptation to different habitats under differing environmental conditions is common. For example, in North Florida, Rudbeckia hirta (black-eyed Susan) most often occurs in upland habitats while in Central and South Florida, it mainly occurs in moist prairies and flatwoods; it also is common in disturbed habitat throughout its range.

In conclusion, I assert that there is enough reasonable doubt about C. basalis being non-native in Florida to nullify that conclusion, and hence C. basalis should be deemed native.