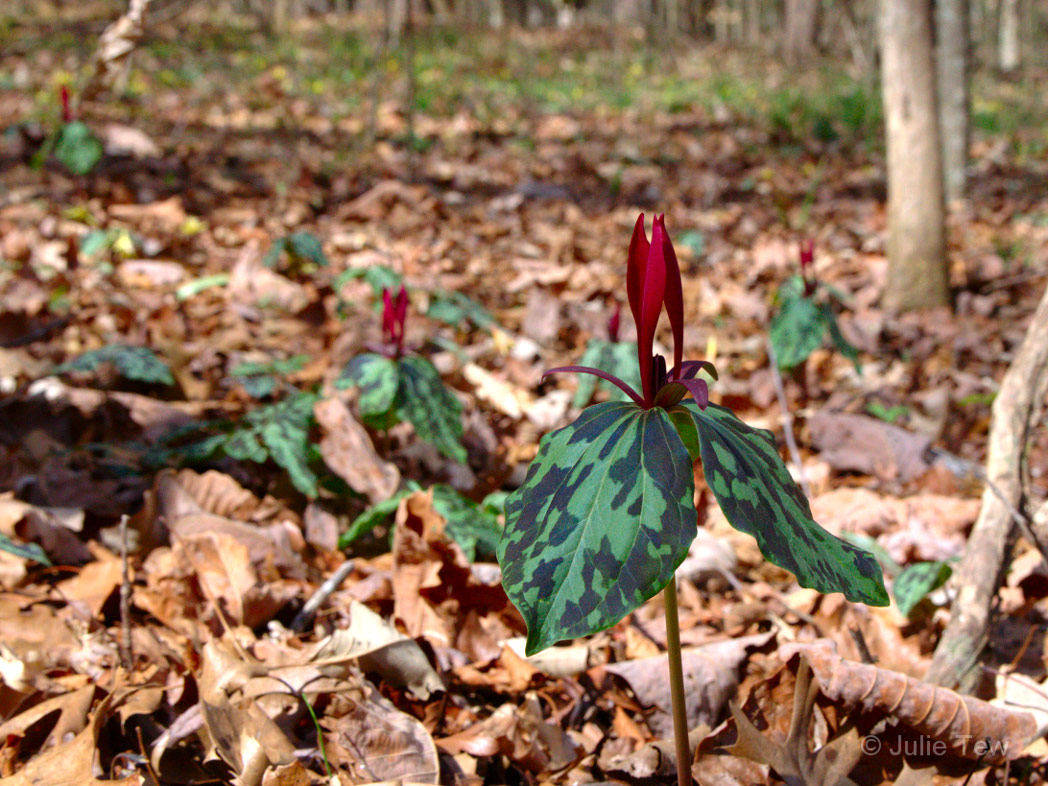 Wakerobins(Trillium spp.) are long-lived perennial wildflowers native to upland hardwood forests, slope forests, hammocks and bluffs. They typically bloom in late winter before the tree canopy leafs out, but can bloom as late as early spring.

The common name wakerobin refers to the flower appearing around the same time as the first robins. It is also known as birthroot due to its medicinal use during childbirth, and toadshade because some have said it resembles a toad-sized umbrella.

Four species of wakerobin have been found in Florida:

Wakerobin flowers are solitary and appear just above the leaves. All species have three sepals and three petals, with petal color varying from maroon (T. maculatum) to purple (T. underwoodii) to greenish-yellow with purple (T. decipiens). Petals are erect and elliptic to narrowly spatulate. Sepals are lanceolate and may be erect or flat and green or purplish/maroon, depending on the species. Leaves are sessile and born in threes in a whorled arrangement. They are mottled and veiny with entire margins. Seeds are born in berries.

Family: Trilliaceae (Trillium family)*
Hardiness: Zone 8
Soil: Moist, well-drained calcareous soils with high pH
Exposure: Partial to full shade
Growth habit: 8–12” tall depending on the species
Propagation: Division
Garden tips: Wakerobins require very specific habitat conditions. Do not attempt to incorporate this plant into your garden unless you can meet all of its conditions. Mulch with a light layer of leaf litter.

Plants generally are not commercially propagated; however, T. underwoodii is occasionally available. Visit www.plantrealflorida.org to find a nursery that carries it.

Caution: All four species of Wakerobin are moderately to very rare. Do not harvest wild plants or purchase them from someone who might have acquired them illicitly.

*Some sources, including the Angiosperm Phylogeny Group (APG III system of flowering plant classification), have moved Trilliaceae to the Melanthiaceae family.