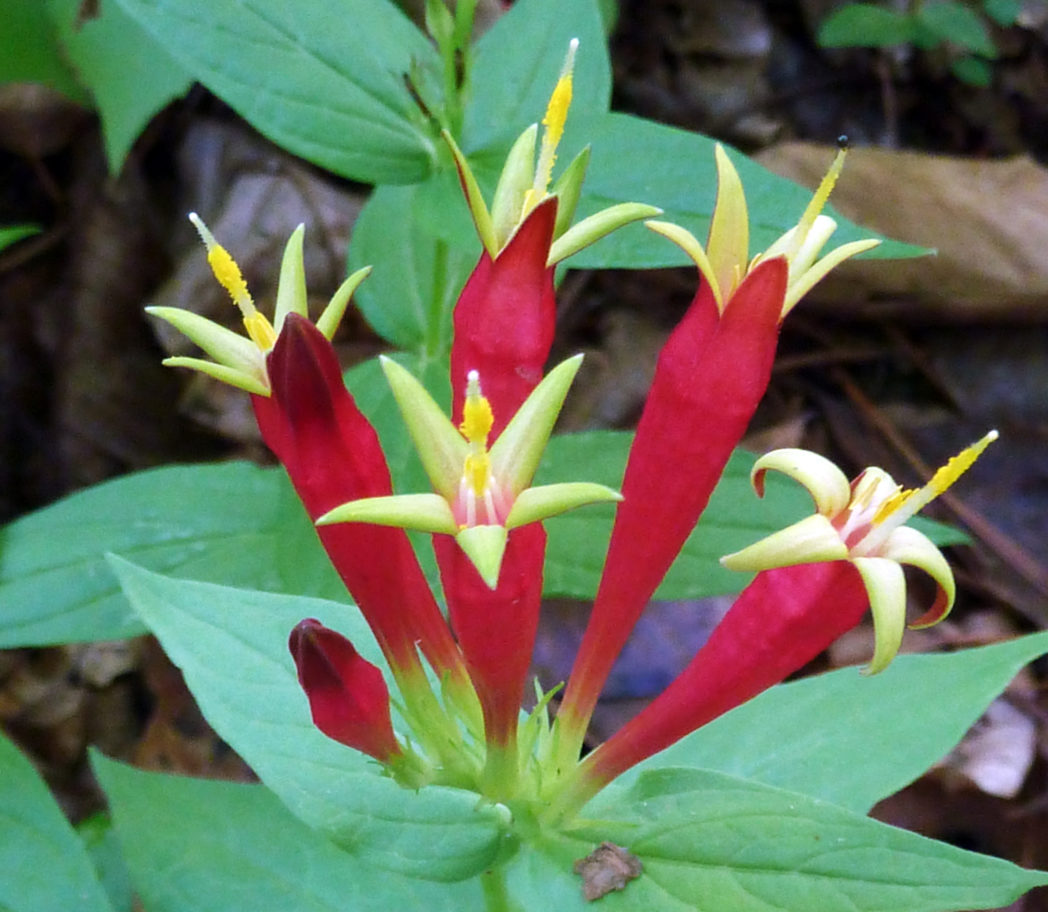 Woodland pinkroot is a showy perennial wildflower. Its flowers are tubular, about 2 inches long and erect. Its petals are scarlet red on the outside and bright yellow on the inside. Its wide leaves are oval in shape, sessile, and oppositely arranged. Its seeds are contained in dehiscent capsules that, when ripe, will pop open and propel the seeds well beyond the mother plant.

Woodland pinkroot blooms in late spring through summer and sometimes into fall. It occurs naturally in upland hardwood forests, slope forests and bluffs, and is pollinated by hummingbirds as well as other insects.

There are approximately 60 species of Spigelia that occur from the southern US south to Argentina. Only four species are native to Florida, and two are endangered: gentian pinkroot (S. gentianoides), which has pink flowers, and Florida pinkroot (S. loganioides), which has white flowers. The latter is endemic to only five counties in Central Florida. Woodland pinkroot (S. marilandica) occurs naturally in Florida in only seven counties.

Family: Loganiaceae*
Native range: Central and eastern panhandle, Santa Rosa County
To see where natural populations of Woodland pinkroot have been vouchered, visit www.florida.plantatlas.usf.edu.
Hardiness: Zones 8A–8B
Soil: Rich, well-drained soil
Exposure: Partial shade
Growth habit: 2–3+’ tall
Propagation: Seeds, root division
Garden tips: Woodland pinkroot’s blooming season can be extended by removing the spent flowers. It is adapted to the growing conditions of northern Florida and tends not to do well in southern climes. It can be propagated by root division or seed (although seed is not easy to come by).

Caution: Although Spigelia roots were once made into a tea to help expel intestinal worms, all Spigelia species are poisonous and may cause serious if not fatal sickness if consumed.

*Many genera that were once classified under the Loganiaceae family have been moved to other families. And some classification schemes have further divided the remaining genera into four families, placing Spigelia in the Strychnaceae (strychnine) family.