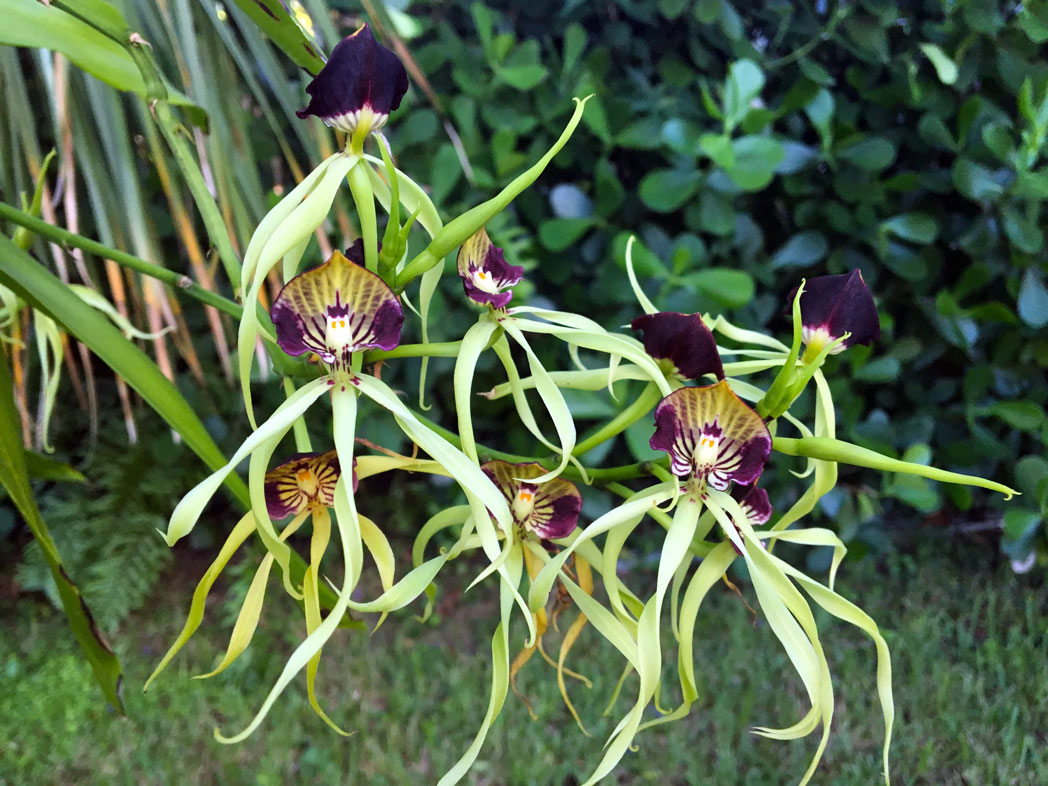 Clamshell orchid is a striking epiphytic orchid found in South Florida’s cypress swamps and hammocks. This state-listed endangered species blooms late fall through early spring, peaking in December. Blooms can last several months. The plant is believed to be self-pollinated in Florida as it has no known pollinators here.

Clamshell orchid flowers have an erect, dark purple modified petal (labellum) with cream-colored markings that forms a hood- or shell-like structure, giving the plant its common name. The labellum covers a greenish-purple column with three pollen-bearing anthers. Two more petals and three sepals hang down below the flower. All are yellowish-green, tapered and twisted. Leaves are long, strap-like and sessile. They are born singularly or in pairs. The stem is a flat, elongated, ovoid to elliptical pseudobulb. Fruits are three-winged capsules bearing many tiny seeds.

Clamshell orchid flowers are distinct in a couple of ways: The labellum covers the top of the column, whereas in most orchids, it occurs below the column. The column of the Florida form has three anthers, however, species outside of Florida have but a single anther.

Prosthechea cochleata was formerly classified as Encyclia cochleata, Anacheilium cochleatum and Epidendrum cochleatum. The plant has several common names, including Florida cockleshell orchid, a reference to its shell-like flower, and Octopus orchid, alluding to the dangling sepals and petals that resemble tentacles.

Clamshell orchid is that national flower of Belize, where it is also known as the Black orchid.

Family: Orchidaceae (Orchid family)
Native range: Peninsula from Martin and Lee counties south to Monroe mainland and Miami-Dade
To see where natural populations of Clamshell orchid have been vouchered in Florida, visit florida.plantatlas.usf.edu.
Hardiness: Zone 10A–11
Lifespan: Perennial
Exposure: Light shade
Growth habit: Up to 2’ long/tall
Propagation: Seed
Garden tips: Although occasionally grown by enthusiasts, Clamshell orchids are not commercially available and may not be harvested or sold without a permit.