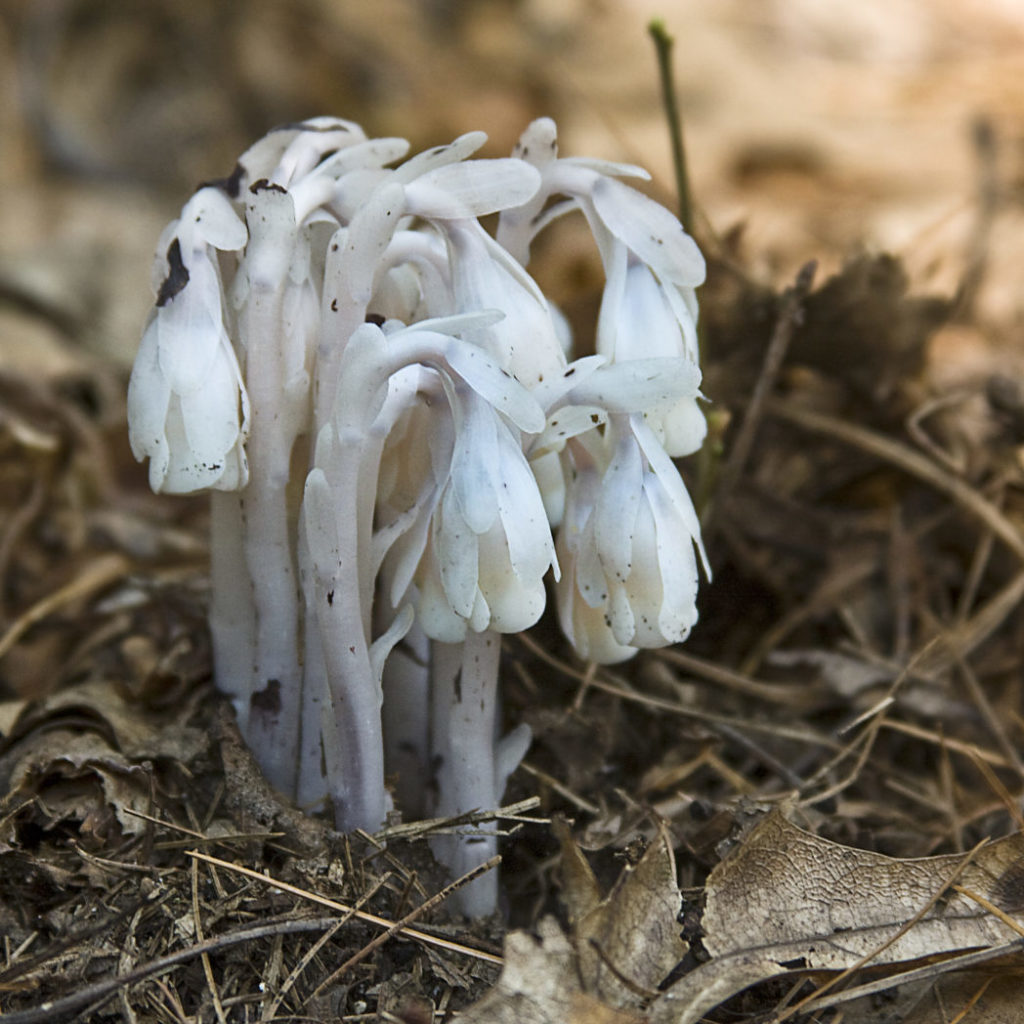 Also known as Ghost plant or Death plant, Indianpipe (Monotropa uniflora) is an interesting and inconspicuous herbaceous perennial wildflower. Unlike most plants, it is non-photosynthetic and does not contain chlorophyll. As a result, all parts of this plant are white and translucent, although at times during its life, it may have a pinkish hue and bear purple to black flecks. Its five-petaled flower is born pendulous or nodding, but becomes perpendicular to the stem as the anthers and stigma mature. Its fruit is a capsule. The flower becomes erect once the capsule is fully mature and seeds are ready to disperse. Leaves are sessile, white and scale-like. Stems may be solitary or appear in clusters. The entire plant turns black when it dies.

Indianpipe is often mistaken for a fungus because of its growth habit and lack of color. It is actually a myco-heterotrophic species, which means it gets its food by parasitizing underground fungi that are mycorrhizal with trees. The fungus is also necessary for Indianpipe seeds to germinate. The plant occurs naturally in mixed temperate hardwood forests and scrub, particularly where the ground is covered in leaf litter and lichens. It typically blooms in November.

According to the Native American Ethnobotany Database, Indianpipe has had many medicinal uses, including treatment of epilepsy and convulsions in children, eye sores, toothaches and pain due to colds.

The species epithet, uniflora, indicates that each stem bears a single flower.

Family: Ericaceae (Heath, azalea or blueberry family)
Native range: Nearly throughout Florida
To see where natural populations of Indianpipe have been vouchered, visit florida.plantatlas.usf.edu/.
Soil: Dry to moderately dry soils
Exposure: Full sun to heavy (but not full) shade
Growth habit: up to 10″ tall
Note: This plant is not commercially propagated. Seek it out in its natural habitat.