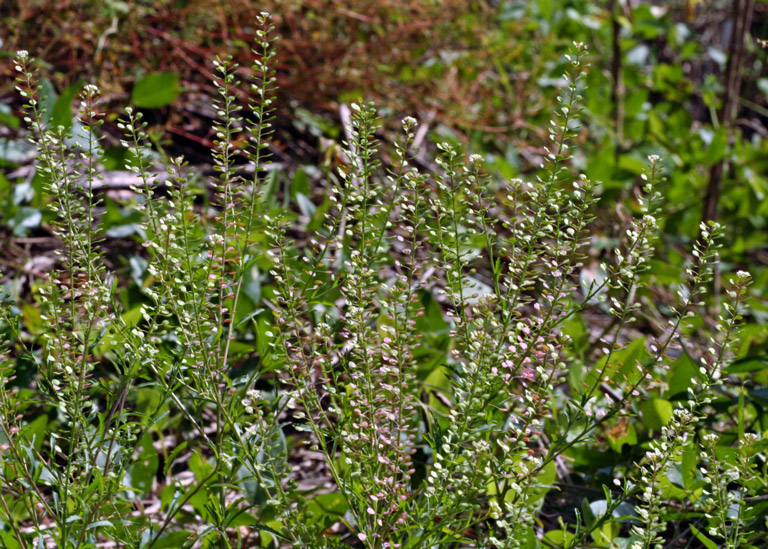 Virginia pepperweed(Lepidium virginicum) begins as a low-growing basal rosette of deeply lobed leaves. Arising from the rosette on branching stems are elongated racemes of tiny whitish-yellow flowers. They have the appearance of thin, greenish-white bottlebrushes. Leaves are linear to lanceolate and toothed. Seeds develop along the stem and vary in shape but most commonly resemble a flat, lentil-shaped disk.

Virginia pepperweed flowers are hermaphroditic (have both male and female organs) and are pollinated by a variety of insects, especially bees. The plant is a larval host for the Checkered white (Pontia protodice) (pictured above) and Great Southern white (Ascia monuste) butterflies.

Virginia pepperweed is a member of the mustard family and is edible to humans. The young leaves, which contain protein and vitamins A and C, can be added to salads or sauteed; the seeds can be used as a substitute for black pepper. (Doubtful? Pop a few clean seeds in your mouth and you will know immediately why this Florida native is sometimes called poor man’s pepper.)

Family: Brassicaceae (Mustard family)
Native range: Throughout Florida except Nassau and Glades counties
To see where natural populations of Virginia pepperweed have been vouchered, visit www.florida.plantatlas.usf.edu.
Hardiness: 7-11
Soil: Dry, well-drained, sandy to rich soils
Exposure: Full sun
Growth habit: 6-20” tall
Garden tips: If eating Virginia pepperweed doesn’t appeal to you, the dried seed stems can also be used in flower arrangements. They are showy, sturdy, and last a long time. Although Virginia pepperweed is rarely planted intentionally, it can show up just about anywhere. It is so prolific that it has earned the title of “weed” — but as Ralph Waldo Emerson said, a weed is simply a “plant whose virtues have not yet been discovered”!