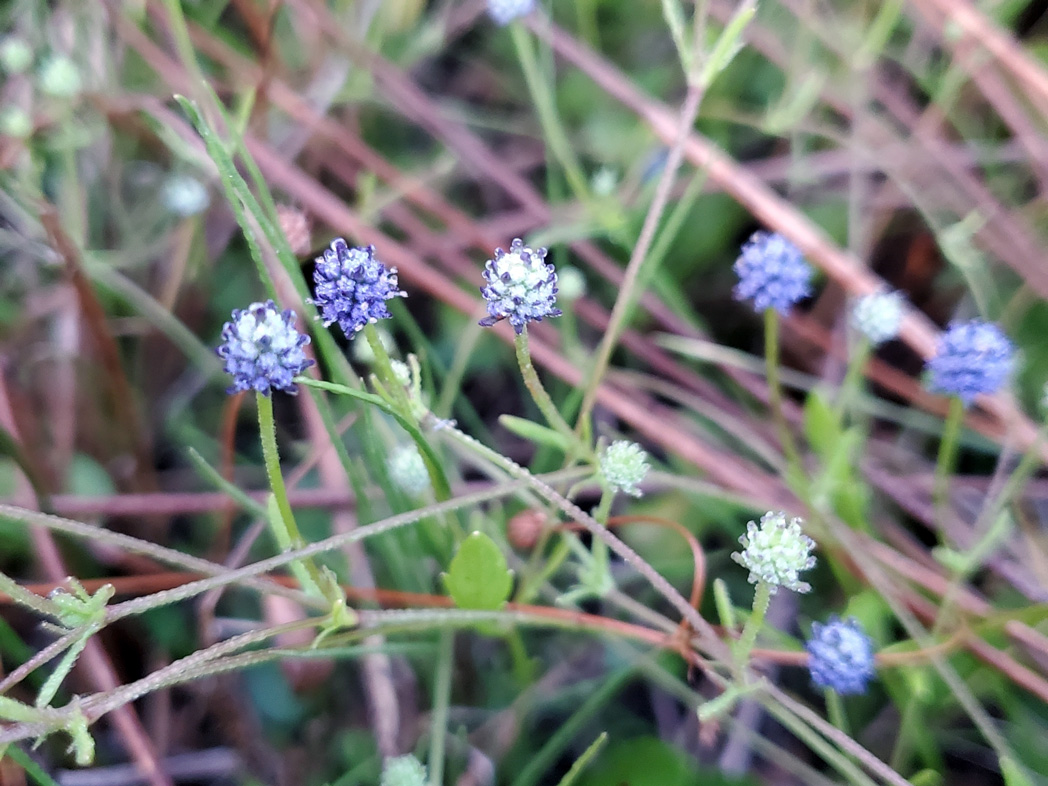 Baldwin’s eryngo is a deciduous perennial (sometimes biennial) wildflower with a prostrate, vine-like growth habit. You’ll rarely notice it as you drive along the highway, but it can form a large sprawling groundcover, providing a hazy, light blue understory to other wildflowers. Eryngium species lack the characteristic umbellate flower form of their other cousins in the Apiaceae (carrot) family. Rather, the umbel is compacted into a tight, prominently globose flowerhead, reminiscent of an aster. In Baldwin’s eryngo, the flowerhead is less than ¼-inch in diameter and comprised of many tiny, greenish-white flowers that turn a purplish-blue. It is subtended by bristly lower bracts. The fruit structure is a schizocarp that splits into separate carpels at maturity. Leaves are small and finely dissected with sharp tips. Stems are thin and multi-branched.

Other than its flower form and prostrate growth habit, Baldwin’s eryngo is a model carrot family representative: It forms a taproot that helps maintain its basal leaves during the winter; it releases a faint, carrot-like odor when crushed; and the plant is a larval host for the Black swallowtail butterfly.

Baldwin’s eryngo occurs naturally in wet hammocks and in disturbed areas such as moist roadsides. It typically blooms in summer, although it has been known to bloom as early as spring and into the fall. It attracts small bees and butterflies.

According to Florida ethnobotanist Dan Austin, Baldwin’s eryngo was used as a breath freshener with aphrodisiac influence. A candy version was referred to as “kissing comfits.”

The species baldwinii is named for William Baldwin (1779-1819), a physician and botanist from Pennsylvania who explored the southeastern US looking for medicinal herbs and other interesting plants. Many species bear the Baldwin epithet, and the genus Balduina is also named for him.

Family: Apiaceae (Umbelliferae) (Parsley, carrot or celery family)
Native range: Nearly throughout the peninsula, as well as Gulf, Franklin, Wakulla and Jackson counties in the Panhandle.
To see where natural populations of Baldwin’s eryngo have been vouchered, visit florida.plantatlas.usf.edu.
Hardiness: 8A–10B
Soil: Moist to wet organic soils
Exposure: Full sun to minimal shade
Garden tips: While Baldwin’s eryngo can make an interesting groundcover, it is not ideal for gardens or landscapes because of its specific habitat requirements. It is not commercially available.

Other species of Eryngium are occasionally available from nurseries that specialize in Florida native plants. Growers may post availability on www.PlantRealFlorida.org.

For more information on other Eryngium species, see these resources: