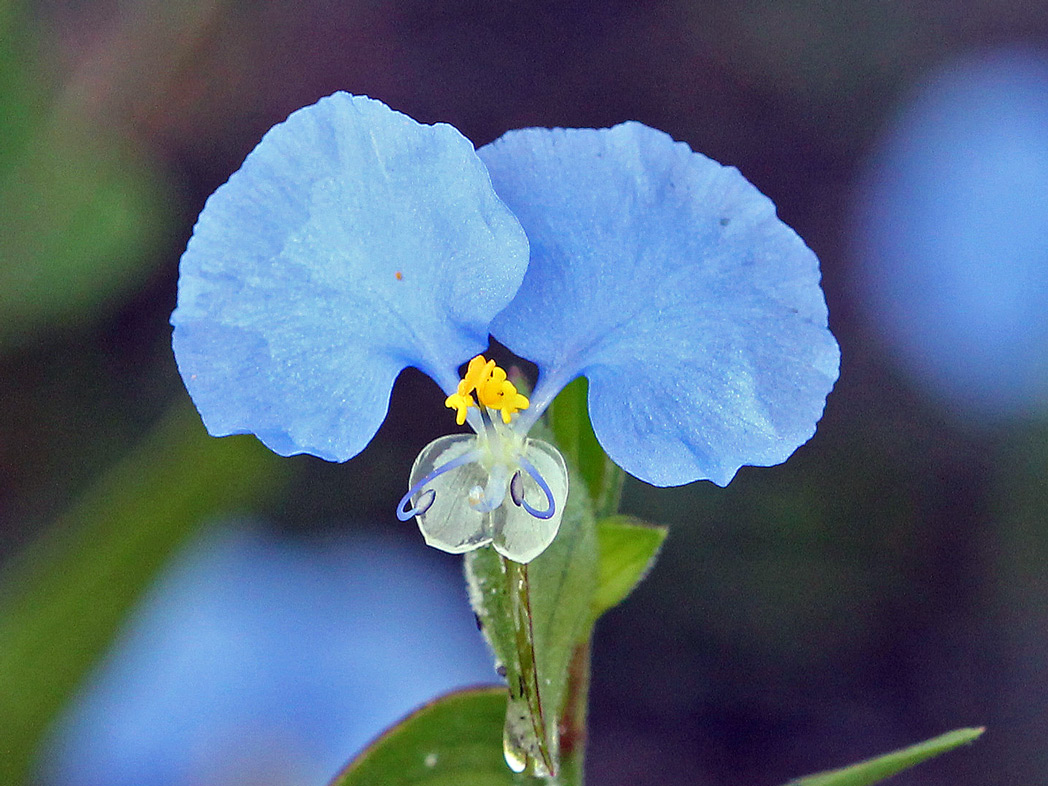 Whitemouth dayflower is an erect perennial wildflower found in pinelands, coastal uplands and scrub habitats. It is one of only two native species of Commelina (the other being Virginia dayflower, C. virginica); there are seven non-native species, several of which are commonly found in Florida lawns and disturbed areas. C. erecta is the only one found in xeric conditions, full sun and with an upright habit.

Flowers are terminal, and have two large, earlike petals that are purplish-blue and a much smaller white petal that appears below the others. Stamens are long, curved and pale purple. Pistils are bright yellow and conspicuous. Leaves are linear– to lance-shaped, sessile and clasping. They are alternately arranged. Stems are soft and jointed. Fruits are inconspicuous capsules.

Whitemouth dayflower generally blooms in summer and fall, but is known to bloom year-round in South Florida. Blooms attract a variety of pollinators, especially bees. Seeds are eaten by birds, and the foliage is sometimes consumed by gopher tortoises. The plant is also edible to humans. The flowers can be eaten raw or candied. Leaves are best cooked (boiled or fried), but the young shoots and tips can be eaten raw.

The common name “whitemouth” refers to the tiny white petal that, because of its placement, gives the appearance of a small white mouth. “Dayflower” refers to the ephemeral nature of the flower — they open in the morning and are closed by early afternoon. The plant is a profuse bloomer, however, and may remain in constant flower throughout the season.

Family: Commelinaceae (Dayflower or spiderwort)
Native range: Nearly throughout
To see where natural populations of whitemouth dayflower have been vouchered, visit florida.plantatlas.usf.edu.
Hardiness: Zones 8A–11
Soil: Moist to very dry, well-drained sandy or calcareous soils
Exposure: Full sun to partial shade
Growth habit: 12–18” tall and sprawling
Propagation: Seed, cuttings, division
Garden tips: Whitemouth dayflower is not usually available at nurseries, but it is easy to grow if you have access to cuttings or a plant large enough to divide. It is best in naturalistic and restoration landscapes, but is suitable for a wildflower garden. It grows in nutrient-poor soil and is very drought tolerant.