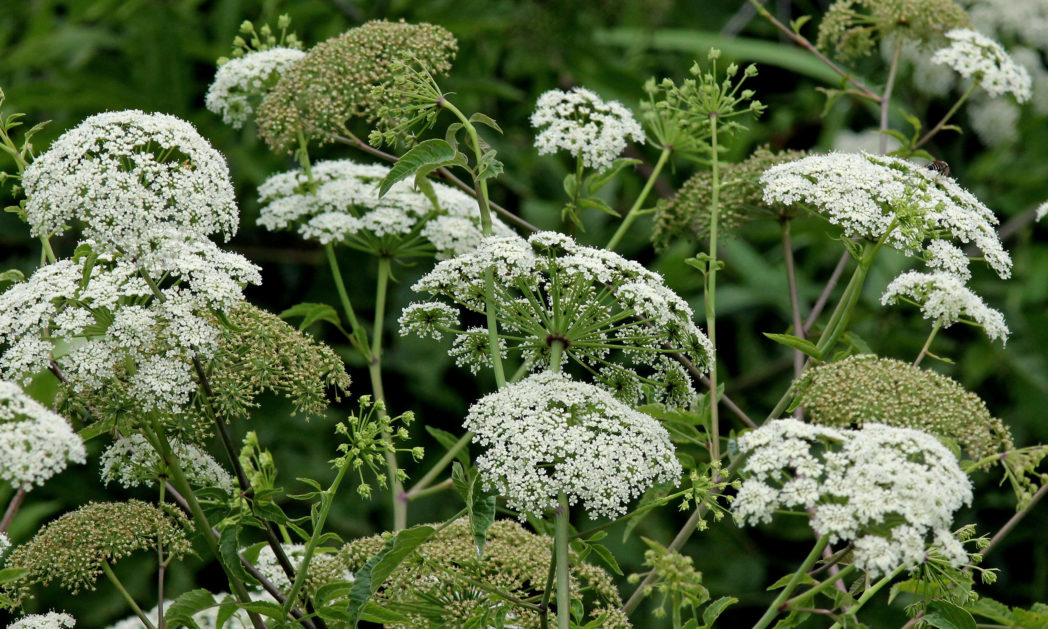 Spotted water hemlock(Cicuta maculata) is a robust herbaceous perennial with a bad reputation of being one of the most toxic plants known to man. It occurs naturally in freshwater swamps, marshes and floodplains, and along riverbanks and roadside ditches. It blooms spring through fall and dies back in winter. It attracts many species of bees, wasps and butterflies, and is a larval host plant for the Black swallowtail (Papilio polyxenes).

Spotted water hemlock’s inflorescences are compound umbels borne on stalks – typical of many Apiaceae family members. Flowers are white, with five petals, sepals and stamens. Leaves are long, pinnately compound and alternately arranged. Leaflets are elliptic– to lance-shaped with toothed margins and are oppositely arranged. Stems are smooth, hollow and highly branched. They can be entirely purple, or green with purple splotches or streaks.

Like all other plants in the Cicuta genus, spotted water hemlock contains cicutoxin, a poisonous compound that can fatally disrupt the central nervous system. In humans, symptoms such as nausea, vomiting and abdominal pain will appear within 30 to 60 minutes of ingestion, followed by tremors, convulsions, seizures or death. It is also known by the more telling common names of beaver poison and suicide root. It is not, however, the famous hemlock that killed Socrates; that was poison hemlock (Conium maculatum), a relative of spotted water hemlock.

Family: Apiaceae (also Umbelliferae) (Parsley, carrot or celery family)
Native range: Nearly throughout the peninsula and in a few Panhandle counties
To see where natural populations of spotted water hemlock have been vouchered, visit www.florida.plantatlas.usf.edu.
Soil: Saturated to inundated soils
Growth habit: 4’+ tall
Caution: Spotted water hemlock is often mistaken for elderberry (Sambucus nigra), which has a similar flower form and is found in the same habitat (often growing alongside spotted water hemlock). However, elderberry flowers and fruits are edible. Extreme caution should be used when harvesting elderberry to ensure you have the right species. For more information on how to tell them apart, check out www.eattheweeds.com.