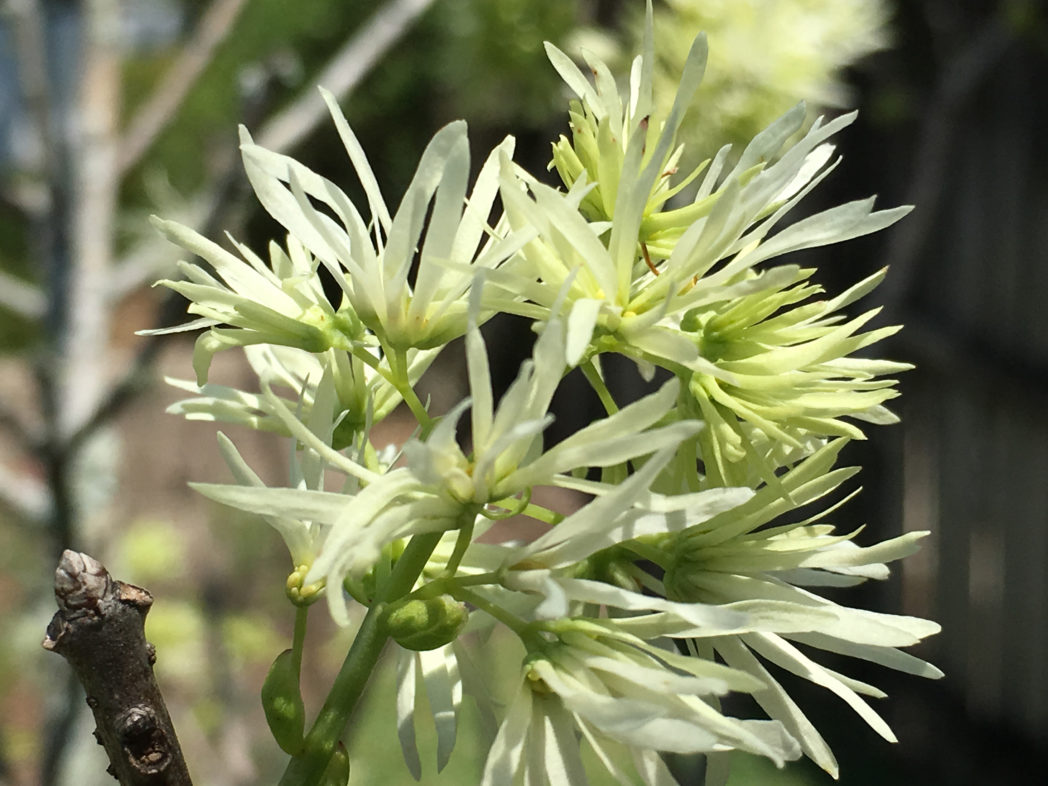 Also known as Old man’s beard (or Grancy graybeard in limited circles), Fringetree(Chionanthus virginicus) is often overshadowed by dogwood, plum and other spring-flowering trees. But fringetree’s graceful tassled flowers put on an equally spectacular display. Each fragrant flower consists of four long, linear, ivory-colored petals. They are born in many loose, pendulous clusters that give the tree its “fringed” appearance, and typically appear in late spring when other trees are finishing blooming. Leaves are dark green, lanceolate to oval with pale undersides and entire margins. They are oppositely arranged. Fringetree will leaf out in late spring and drop its leaves in early fall. Fruits are fleshy, olive- or egg-shaped drupes that turn dark blue to purplish-black as they mature in summer and fall. They are born in dangling clusters.

Fringetree occurs naturally in a variety of habitats including moist hammocks and sandy uplands. It attracts many pollinators, including bats. It is the larval host plant for several species of sphinx moths. Birds love the fruits. The fringetree is dioecious, which means both a male and female specimen are needed to ensure pollination and fruit. (Both the male and female trees will produce flowers, but only the female tree will produce fruit.)

Native Americans used the roots and bark to treat skin inflammations and wounds.

Family: Oleaceae (Olive family)
Native range: most Panhandle and north and central peninsula counties (see range map for actual vouchered locations)
To see where natural populations of fringetree have been vouchered, visit www.florida.plantatlas.usf.edu.
Hardiness: 8A–9B/10A
Soil: Moist to moderately dry, fertile soils
Exposure: Full sun to partial shade
Growth habit: 15’+ tall, 5+’ wide
Propagation: Seed
Garden tips: Fringetree is fairly adaptable to a variety of conditions and is drought-tolerant once established. It is non-descript when not in flower, so plant in a mixed setting with other trees that will divert attention the rest of the year.

Fringetree plants are often available from nurseries that specialize in Florida native plants. Visit www.plantrealflorida.org to find a nursery in your area.