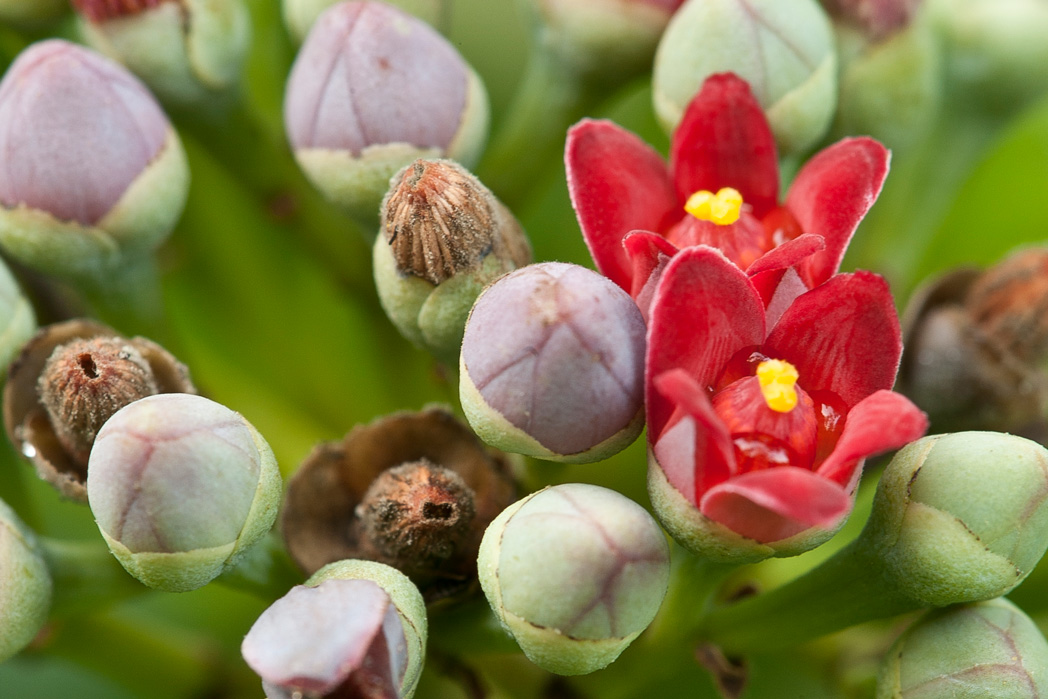 Also known as Wild cinnamon, Cinnamon bark is an evergreen flowering shrub or small tree found in coastal hammocks in Florida’s extreme southern counties. Although common in the Keys, it is a state-listed endangered species. The plant blooms year-round, peaking in spring and summer and attracting butterflies, especially Schaus’ swallowtail. Birds and other wildlife eat its fruit and find cover in its foliage.

Cinnamon bark’s small flowers have five bright red petals. They are born in dense corymbs and emerge from purplish buds cupped in green sepals. Stamens are red and fused with noticeable yellow anthers. Leaves are simple, obovate and bright green with a shiny upper surface and pale underside. Leaf length is between 3 and 5 inches. Margins are entire. Arrangement is alternate. The trunk is usually straight and may grow to 10 inches in diameter. Bark is grayish-white and becomes scaly as the plant matures. Seeds are black and born in green berries that turn crimson red and fleshy when ripe.

Flowers, fruits and crushed leaves are aromatic and have a fiery, cinnamon-like taste. Historically, the fragrant inner bark was used as a substitute for cinnamon. The outer bark is toxic.

Canella winterana is the only genus in the Canellaceae family that occurs in Florida. Despite its common name, Cinnamon bark is not related to the common kitchen spice Cinnamon, which may be one of several species in the genus Cinnamomum.

Family: Canellaceae
Native range: Miami-Dade and Monroe counties (mainland and the Keys)
To see where natural populations of Cinnamon bark have been vouchered, visit florida.plantatlas.usf.edu.
Hardiness: Zones 10A–11
Lifespan: Perennial
Soil: Moist to dry, well-drained sandy, loamy or calcareous soils
Exposure: Full sun to light shade
Growth habit: 15–20’+ tall
Propagation: Seed
Garden tips: Cinnamon bark works well as a specimen plant or as a hedge or buffer. Its dramatic foliage, attractive form, persisting fruits and flowers, and spicy fragrance provide year-round interest. The plant is salt tolerant and may be drought tolerant once established. It is slow-growing, but generally pest and maintenance free.

Plants are available from nurseries that specialize in Florida native plants. Visit www.PlantRealFlorida.org to find a nursery in your area.