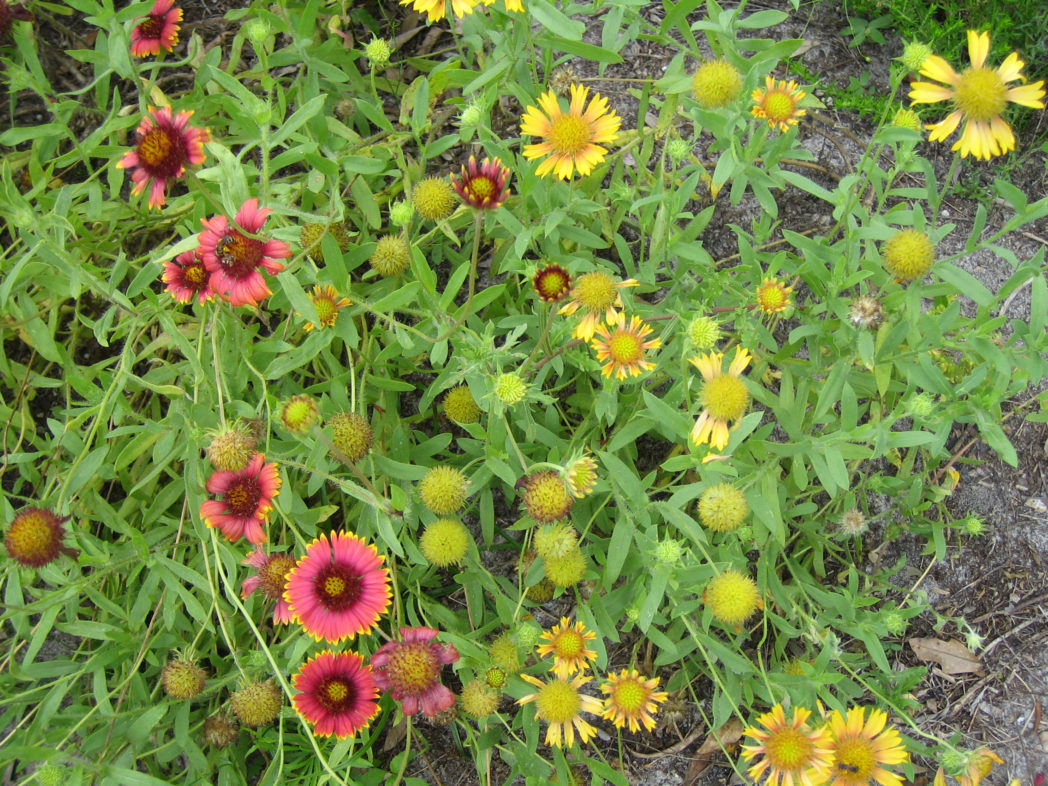 Don’t let the title scare you off! I’ve been wondering why plants of the same species sometimes occur in different colors, so I did a little research. Some common flowers that have appeared in my garden are red and yellow forms of Butterfly milkweed (Asclepias tuberosa) and red, pink and white Tropical sage (Salvia coccinea), which I’m sure many of you have also grown. Do you ever have white flower forms of your typically blue Spiderwort (Tradescantia ohiensis) or Stokes’ aster (Stokesia laevis)? Wonder what’s going on?

There are scientific papers that are the results of years of study, but I hope to shed a little light on the subject without having to pursue a new degree in molecular biology.

We know flowers are genetically coded for their primary colors, but variations in colors may also occur through a natural mutation of genes. For example, dark purple flowers may mutate to lighter purple, and seeds from those flowers may produce plants with flowers of various shades of purple. One of the commonest mutations in populations of plants with purple flowers is that they occasionally produce plants with white flowers. This mutation is almost never reversed, with white plants producing purple offspring.

As far back as Charles Darwin’s time, pollinators were linked to flower color and shape, and until the 1970s, flower color variation was thought to be an adaptation for pollinator ecology. For instance, there are tubular red or orange flowers are pollinated by birds with elongated beaks, white-flowered plants that open at night for moth pollination, and bee-pollinated plants that are blue or purple, colors that seem to draw bees.

Bees are still considered an important factor in determining flower color and are a predominant consideration of the study of polymorphism. When they visit flowers, bees transfer pollen grains with genetic information to nearby plants of the same species. It has been shown that they may prefer certain colors. Experiments show bees avoid white flowers when these comprise less than 25 percent of the flower population, but this discrimination disappears when white flowers comprise 50 percent or more of the population. There is no discrimination among pink or blue flowers. (Bees may have difficulty detecting achromatic flowers like white, resulting in a preference for more easily seen colors that improve their foraging ability.) The white flowers that are not cross-pollinated end up being self-fertilized. This ensures reproduction but sometimes results in reduced vitality of the next generation plants due to inbreeding. My own observation confirms this when I compare my strong red salvia with the more fragile white-flowered salvia growing in the same garden space.

If you are a curious gardener, try to observe the color of flowers most popular with bees. What other factors do you think might influence the bees’ choice?

Current researchers do not discredit the importance of pollinators, but they now also view color variation as the effects of ecology and gene mutation caused by natural selection. Each flower species contains anthocyanin pigments that control flower color. These pigments, in turn, are controlled by genes. The fitness of the plant — described by flower number, seed number or biomass — also contributes to the puzzle.

Apparently, there are a lot of people who would also like to crack open the question of color variation in flowers. A literature search reveals dozens and dozens of papers from all over the world looking for answers in places as that range from plant morphology to genetic drift.

If you want to see how complex these studies can be — check out research from Duke University done on native Texas phlox. The paper includes a study sampling native populations at 39 sites across southeast Texas. Flowers consisting of blue, red and their hues were counted, and 605 samples were returned to the lab, where DNA was extracted from leaf tissue. Each sample was genotyped at nine locations on the gene using DNA analyzers and gene-marking software. DNA was subsequently tested for genetic variation to differentiate populations by flower color. After exhaustive tests, statistics was used to compile data and form visual graphs of molecular signatures. The conclusion at the end of this three-year journey was that “natural selection with reproductive character displacement causes color variation, and not the alternative hypothesis of neutral drift and restricted gene flow.”

Peeking inside the plants

Getting down to the real nitty-gritty, you have to look at what’s going on inside the plant (and I mean way inside). The advancements of molecular biology in plant science in the last two decades are unlocking the relationships between plant biology and the environment with new technologies that are helping to study the genes of flavonoid biosynthesis that control flower color.

Pathways — complex mapping systems that help scientists visualize and mark groups of chemicals found at specific locations in genes — are helping scientists unlock plant secrets, including those of anthocyanin pigments that are responsible for flower color. To study the anthocyanin pathway’s role, scientists identify plant enzymes and trace side branches that control structural support, plant disease defense, UV protection, pollen viability, and color pigments. Enzymes influencing color have been identified as CHS (chalcone synthase) and DFR (dihydro flavonol), but due to the mobility of genes and multiple copies, it’s been difficult to credit one gene for color variation.

According to researchers at the University of California, Riverside, flower color is determined by a regulatory gene in the anthocyanin pathway, rather than by one particular structural gene. More research is needed to identify this gene on the molecular level and to include it in the study of plant modeling systems, which is itself a new innovation. Modeling is a tool now commonly used for predicting weather and climate, soil and water interactions and natural resource management. But plant models are also being designed to help understand processes of plant growth and to forecast possible interactions by simulating different conditions like genetics and environmental impacts. Techniques of modeling assign geometric patterns and mathematical symbols to plant and environmental components to make predictions that cannot be adequately proven using known scientific methods.

As far as an answer to polymorphism, I’m sorry to disappoint, but the scientific jury is still out. The answer to color variation in our gardens may be due to genetic mutation, but the microbiologists will have to let us know in the next decade or so.

Until then, just enjoy the myriad color and textures of your wildflowers and revel in the complexity of nature.

Claudia Larsen is the Foundation’s Seeds for Schools program administrator. She owns Micanopy Wildflowers, a nursery in Micanopy, FL.